Qantas Round the World Business Class

This text will be replaced

Qantas Round the World Business Class Year Round Fares


ALL above fares are PER PERSON and INCLUDE all fuel surcharges and taxes. Rates are subject to high season surcharges, availability and changes without notice. Advertised rates are based on the lowest available fare and may differ at time of booking. All featured “from” prices are based on the lowest priced routing for the destination(s) listed. Taxes may increase if stopping over at a destination, returning from an alternative port or if not paid in full at time of booking. Other travel dates may be available at an additional cost. Please ask one of our Travel Specialists for full details, terms and conditions.

You can use our online booking engine to search for availability or book online (Not available for mixed class fares). If rates differ from advertised fares, it may be due to conditions of the fares or limited availability of the lowest fares on the dates requested. Call us to help you find the best fares for suitable dates. Call us if you are booking flights departing within 3 working days. Seats are held when using the online booking engine, however tickets are not issued instantly, our Travel Specialists will contact you to confirm full details and preferred payment method before issuing tickets. 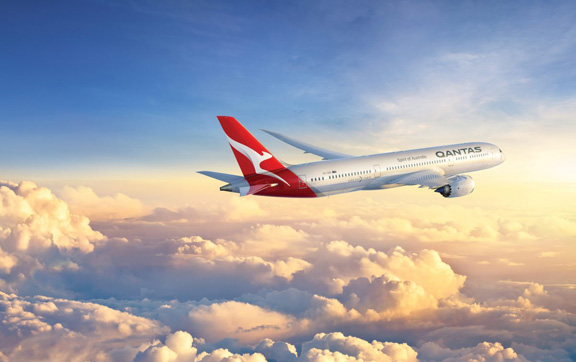 Qantas is the world’s second oldest airline. It was founded in the Queensland outback in 1920 and is Australia’s largest domestic and international airline. Qantas is recognised as one of the world’s leading long distance airlines, having pioneered services from Australia to North America and Europe.

The Qantas story is inextricably linked with the development of civil aviation in Australia. It begins with fragile biplanes carrying one or two passengers in open cockpits and progresses to the new Airbus A380s flying some 450 people half way around the world in a day.

But, it is a story of human endeavor, not just machines. A few determined individuals overcame formidable obstacles to establish the Queensland and Northern Territory Aerial Services Ltd (QANTAS). Supported by committed staff and loyal customers, the airline persevered through war and peace to serve the nation and build an enterprise. The Qantas story is about the people who have created its exciting and productive history – its staff, its customers and the excellence of its business partners and key suppliers…

The future holds many challenges for Qantas – maintaining safe operations and world class product standards while building a viable and competitive position long term for the airline.

Two of the world’s leading airlines are forming a global partnership. Qantas and Emirates fly 14 times a day from Australia to Dubai, and provide ‘one-stop’ access to 65 destinations across Europe, the Middle East and North Africa. They offer the largest shared A380 network, exceptional lounges here and abroad and award-winning service -a truly aligned travel experience.

Together, Qantas and Emirates offer one of the most comprehensive international networks in the world. Flying through Dubai on Qantas and Emirates’ 98 A380 and B777 flights per week from Adelaide, Brisbane, Melbourne, Perth and Sydney, you can then connect to more than 65 cities in Europe, the Middle East and North Africa. This includes seven daily A380 services to London Heathrow, and daily A380 flights to Paris, Rome, Munich, Amsterdam, Manchester and Moscow – a total of over 800 flights per week. 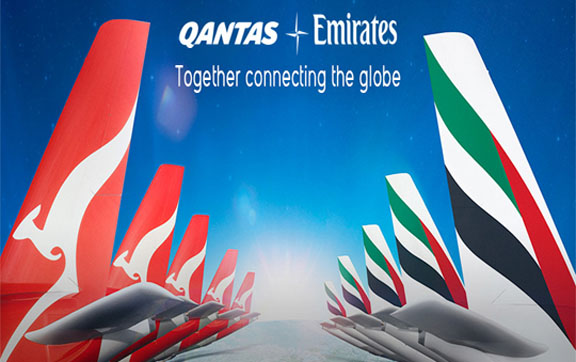 The new partnership with Emirates will mean more flights and more choice for every Qantas Frequent Flyer. You can earn and use points when flying on the Emirates network. Which means you can use your Qantas points to buy an Emirates flight and vice versa. You’ll also earn Status credits on many Emirates flights, as long as you have a QF flight number on your ticket. Eligible members will be able to use Emirates Lounges across Australia, Europe, Asia, North Africa and the Middle East. However, you cannot use Qantas Frequent Flyer points to upgrade Emirates bookings and vice versa.

You can book flights with points right now using Points Plus Pay and Any Seat Award. You’ll also be able to book Classic Awards on Emirates flights across the globe.

Eligible Skywards Members and Qantas Frequent Flyers as well as travellers in premium cabins will have access to Emirates and Qantas Lounges.

This includes access to Emirates’ First Class and Business Class Lounges in Concourse A in Dubai Terminal 3 and Qantas’ award-winning First Lounges in Sydney and Melbourne, as well as Qantas and Emirates Lounges in Australia, Europe, the Middle East and Africa.

Qantas flights through Dubai will use Emirates’ Concourse A in Terminal 3, purposefully designed for A380 aircraft and the first facility of its kind anywhere in the world.

A brand new, state-of-the-art facility, Concourse A includes expansive First and Business lounges that run the length of the Concourse, with direct boarding from the lounges to the Concourse’s 20 gates.

Your overall baggage allowance will be the same on Qantas and Emirates (with the exception of sporting goods and infant allowances).

For more information regarding Qantas’ baggage allowance, please contact one of our Travel Specialists.

For First and Business travellers, your journey starts from the moment you leave your front door with our new complimentary Chauffeur Drive service.

Three membership tiers above the entry Bronze level – Silver, Gold and Platinum. Members can move up to the next level by accumulating the required Status credits (in addition to normal program points) which can be earned each time they fly on an eligible flight with Qantas, Jetstar, oneworld alliance airlines and Air Pacific (flights must include a minimum of four eligible flights with a Qantas, QantasLink or Jetstar flight number, each year). Each membership level offers particular privileges, including higher priority check-in, baggage allowances and, for Platinum and Gold members, complimentary Qantas Club membership. Eligible Frequent Flyer members also have access to oneworld lounges. The higher the membership status, the greater the privileges including additional points when flying on all Qantas, British Airways and American Airlines flights.

Flights operated by Qantas to European cities stop over in Dubai. 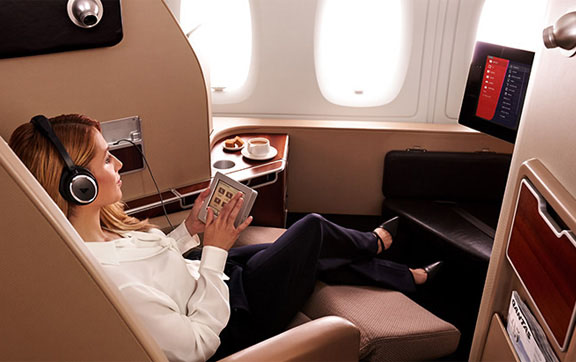 Discover the award winning journey of unsurpassed luxury in Qantas First Class. Your journey begins from the moment you leave your door until you arrive at your destination.

Experience a new level of inflight comfort as you stretch out in your fully flat, extra-wide bed. Qantas' Bedding Down service features luxurious pillows, blankets, a duvet as well as a sheepskin mattress.

Controls at the end of your armrest move your seat, leg rest and lumbar positioning from a relaxed reading position, to a fully flat bed of up to 212cm on our A380 and 200cm on our B747s. Your space also features an ottoman so you can host a companion inside your suite during the flight. 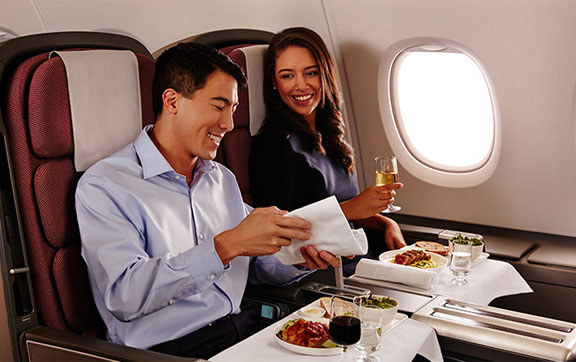 When you fly with Qantas Business Class, from check-in to arrival it's all about you.

Whether you’re relaxing, working, being entertained or sleeping, Qantas wants you to fly in contemporary comfort. Enjoy a new level of intelligent seating with their award-winning Skybed.

Once you’ve made use of your extensive storage space, shift your seat into a position that suits you, using a wide range of seat adjustments. You can explore the seat’s unique massage options or settle in to enjoy your own personal inflight entertainment. You might just want to flick on your reading light and snuggle into your Skybed cocoon with a good book. When you’re ready to sleep, convert your Marc Newson-designed, second generation Skybed into a two-metre, fully-flat bed.

For First and Business travellers, your journey starts from the moment you leave your front door with our new complimentary Chauffeur Drive service.

Enjoy complimentary lounge access when you travel in Business or First Class with Qantas.

Start your international journey in the comfort of the International Business Lounge, found in key Qantas destinations around the world. With fresh, delicious dining options, shower facilities, private work areas, it’s the only way to travel.

Baggage allowance will change depending on your desired routing and chosen fare, please ask your Travel Specialist for exact information regarding luggage allowances for your flights.

Special Offers
Not Ready to Book?
Other Airfares from Qantas Airlines
Qantas to Asia First Class
Sale until 17Apr20
from $6,095

Qantas to South America Business Class
Sale until 17Apr20
from $4,750

One World Alliance Round the World First Class
Sale until 17Apr20
from $18,395

Please insert the passport names of all who are travelling.