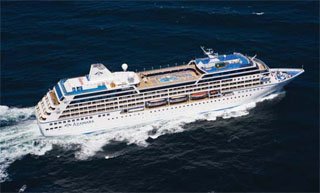 Fares are per person twin share in AUD and are subject to availability. Fares are a “from” price based on lowest available and may be differ at time of booking. Single passanger fares are available at an additional fare. For more information and full terms and conditions please contact one of our travel specialists.

GENE SARAZEN: Today play the Palmer Ryder Cup Course of The K Club. This beautiful parkland course was designed by Arnold Palmer and hosted the 2006 Ryder Cup with all is attendant drama. The course covers an area of mature woodland to the west of Dublin City to which fourteen lakes have been added. Note: Golf cart venue

Tour: Enjoy Dublin on your own or via Azamara Land Discoveries.

Tour: Enjoy Holyhead and the nearby Snowdonia National Park on your own or via Azamara Land Discoveries.

GENE SARAZEN: Today play Royal Lytham & St Annes. Having hosted ten British Open Championships Royal Lytham is arguably the toughest driving course on the rota, boasting a number of well placed and deep fairway bunkers. It was here in 1926 that Bobby Jones won the Championship, his legendary shot to the 17th green commemorated by a plaque.

TOM WATSON: Today play Royal Birkdale. A course which provides a formidable test of links golf with each hole running in valleys between towering sandhills. The Open was last played at Birkdale in 2008 when Padraig Harrington lifted the Claret Jug to complete back to back wins. Site of Arnold Palmer’s Open Championship win in 1961.

Tour: Enjoy Liverpool & The Lake District on your own or via Azamara Land Discoveries.

Tour: Enjoy The Isle of Man on your own or via Azamara Land Discoveries.

GENE SARAZEN: Today play the PGA Centenary Course of Gleneagles Hotel. This highly acclaimed modern classic of Jack Nicklaus design is host venue to the 2014 Ryder Cup. The course is set in a most spectacular location in the rolling Perthshire hills and affords wonderful views of the Grampian Mountains and the surrounding countryshire.

TOM WATSON: Today play the King’s Course of Gleneagles Hotel. Opened in 1919 and designed by the revered James Braid, The Kings Course sits high on a beautiful moorland plateau, and has tested the aristocracy of golf over the years. In 1921 it hosted the first Ryder Cup between the USA and Great Britain.

Tour: Enjoy Glasgow on your own or via Azamara Land Discoveries.

Today attend the final round of the 145th Open Golf Championship at Royal Troon. Azamara Quest will anchor off the coast with tenders to shore and short onward transfers to the golf course operating to a scheduled timetable giving flexibility to allow you to stay as long as you wish at the championship. Non-Golfing spouses are invited to sign up to attend.

Tour: Enjoy Ayr on your own or via Azamara Land Discoveries.

GENE SARAZEN: Today play Royal County Down. Located in the town of Newcastle to the south of Belfast. Consistently ranked in the top 10 courses in the world, this is a true test of links golf set against the magnificent backdrop of the Mountains of Mourne. Host to the 2007 Walker Cup Match featuring a young local by the name of Rory McIlroy, and an all-star USA lineup.

TOM WATSON: Today play Royal Portrush. It holds the distinction of being the only course in Ireland to have hosted The Open Championship (The British Open). Royal Portrush has now been invited to again host The British Open, anticipated as 2019 after an almost 70 year absence. The Dunluce Course is as fine a links as you will find anywhere, with the 5th being a particularly memorable hole to a green hanging on the edge of a cliff. Consistently ranked in the top 20 of the world’s best courses.

Tour: Enjoy Belfast on your own or via Azamara Land Discoveries.

Tour: Enjoy Waterford, Ireland on your own or via Azamara Land Discoveries.

GENE SARAZEN: Today play Old Head Golf Links, opened for play in 1997 and now one of the most talked-about golf courses in the world. Old Head is set on a dramatic promontory, protruding over two miles into the Atlantic Ocean. Nine holes play along the cliff tops, and all eighteen holes provide stunning ocean views.

Tour: Enjoy Cork on your own or via Azamara Land Discoveries.

* All category 08 staterooms have an obstructed view. Please note even though Club Oceanview stateroom category 08 have obstructed views, these staterooms represent an excellent value. Each stateroom features a picture window providing natural light, you will find them comfortable and welcoming with all the amenities of an interior stateroom.

When you stay in a Club Interior Accessible Stateroom you will receive the following amenities:

When you stay in an Club Oceanview Accessible Stateroom you will receive the following amenities:

Specifically designed to be smaller and more sleek than most cruise ships, Azamara Quest, like her sister ship, Azamara Journey, is filled bow-to-stern with wondrous luxuries and appointments that enhance your voyage of discovery-making it one that you won’t soon forget.

A boutique cruiseline of distinction. Azamara's smaller ships reach unique destinations larger ships can't. With longer and more overnight stays so you truly immerse yourself in the places travelled. Azamara offers elegant accommodation, fine wines and dining with a host of complimentary amenities. Unmatched Amenities The unique offerings of Azamara are beyond compare: butler service is provided in every suite; shore excursions are designed to let guests become part of the fabric of life in each destination, instead of merely being an observer; the enrichment programs offer everything from culinary to photographic explorations; two specialty restaurants provide the finest cuisine at sea; live entertainment can be enjoyed nightly; and the level of personal service offered is unmatched. Smaller Ships - Out of the Ordinary Destinations Azamara Club Cruises consists of two intimate ships, Azamara Journey and Azamara Quest. Each can carry 694 fortunate guests to discover the hidden corners of the world that larger cruise ships simply cannot reach. In addition to offering a more personalized experience, the ships have recently undergone a $17.5 million revitalization including new European bedding and soft goods, flat screen televisions, new veranda decking and furniture, and wireless internet service in all staterooms and public areas. Plus, 93% of staterooms offer ocean views and 68% have a private veranda.

Why sail away with Azamara?

Experience the Azamara Difference. They don’t simply skim the surface but give their guests the opportunity to immerse themselves in the destination. Yes, you’ll have ample time to sample the cuisine, the shopping, the museuwms, and the monuments, but with longer stays in ports and more overnights you’ll also have time to discover the hidden treasures that tourists seldom see. Stroll down the Ponte Vecchio in Florence and witness the breathtaking sight of the bridge’s lights reflecting on the waters of the Arno below. Lovers of culture will be mesmerized by the traditional operas performed at the Mussorgsky Theater in Russia’s iconic St. Petersburg. Shimmering like a pearl in the moonlight, Bangkok truly comes alive at night with jazz clubs, trendy restaurants and shows ranging from the hedonistic to the spectacular. The truth is, you don’t really know a place until you know it by night, and Azamara’s longer stays and more overnights, offer you a one of a kind experience at an unbelievable value – that’s the Azamara Difference! With Azamara, you’ll love where they take you…   Founded: 2007   No. of Vessels   Demographic   Accommodation   Dining & Beverages   Entertainment   Cruise Price Inclusions   Awards, Honors and Accolades 2011 2010 2009