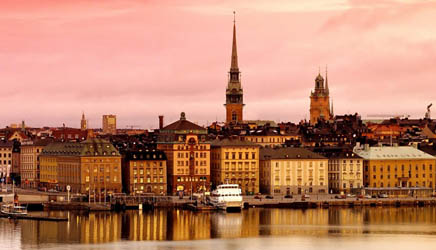 Fares are per person twin share in AUD and are subject to availability. Fares are a “from” price based on lowest available and may be differ at time of booking. Single passanger fares are available at an additional fare. For more information and full terms and conditions please contact one of our travel specialists.

Embark Azamara Quest from 1:00PM onwards. All aboard 4:30PM. Welcome Cocktails & Briefing for a chance to meet your fellow participants.

Morning and afternoon at sea.

Amsterdam originated as a small fishing village in the late 12th century, becoming one of the most important ports in the world during the Dutch Golden Age of the 17th century. You may be thinking of tulips and wooden shoes, perhaps Heineken beer, and some of the city’s past inhabitants: Rembrandt, Van Gogh, and Anne Frank, who wrote her famous diary hidden in a canal-side house. It offers a diverse array of world-class entertainment, and for centuries has been one of the leading centers of culture in Europe. A variety of entertainment is staged in hundreds of venues throughout the city with a multitude of street performers and live bands in bars and cafes completing the scene. Enjoy it on your own arrangements or via Azamara Land Discoveries.

Enjoy Amsterdam on your own arrangements or via Azamara Land Discoveries.

The International is The Netherlands first modern championship golf course, opened for play in 2012. Its headline architect was Masters Champion Ian Woosnam, with the real work done by fastidious Belgian designer Bruno Steensels. Located close to Amsterdam’s Schiphol Airport, the pair have created a magnificent layout with a quite dramatic dunes landscape.

Enjoy a full day at sea on board Azamara Quest

Copenhagen is the capital and most populated city of Denmark, and is known as a city of spires: the skyline of its medieval core is punctuated only by the steeples of churches and towers of palaces, though a modern building boom has overtaken other parts of the city. Today’s Copenhagen is known for its excellent quality of life and environmental consciousness – with many parks, it is green both literally and in today’s sense of the word. It is also bicycle-friendly, with bike paths lining almost every major street. After a ride or wander through the old town, stop for a local repast of Smørrebrød, traditional open-face sandwiches, or a mouthwatering Danish pastry. Enjoy it on your own arrangements or via Azamara Land Discoveries.

GOLF: The Scandinavian was designed by Robert Trent Jones II and is set in a beautiful landscape with undulated ancient woodland terrain and several small lakes a short drive north of Copenhagen. The development was the inspired creation of three Danish entrepreneurs following their sale of Navision to Microsoft. Both courses were laid out between 2006 and 2010 and quickly debuted in the very top of Golf World’s 100 best European courses. The Scandinavian Old Course sprinted past a raft of established golf courses for a grand spot at #15, with The Scandinavian New Course entering at #34.

Enjoy a full day at sea on board Azamara Quest

Helsinki is a successful blend of traditional and modern architecture and design, interwoven with the beauty of nature, and a few quirky, purely Finnish touches – such as a church built inside a giant chunk of granite, and a venue that is a unique combination of café, restaurant, bar, laundromat, and sauna. Classic Russian onion-domed churches share the stage with Nordic minimalism, and a large concentration of Art Nouveau buildings. Prominent globally in the fields of technology, Finland has also recently topped the charts as having the world’s best educational system. Enjoy it on your own arrangements or via Azamara Land Discoveries.

GOLF: Sarfvik Golf Club, located a short drive to the west of Helsinki, was first opened for play in 1991 and presents an excellent layout. It enjoys an undulating and beautifully tranquil tree line setting with an occasional glimpse of the Gulf of Finland.

St Petersburg is one of the world’s most beautiful cities, and has all the ingredients for an unforgettable travel experience: high art, lavish architecture, wild nightlife, an extraordinary history and rich cultural traditions that have inspired and nurtured some of the modern world’s greatest literature, music, and visual art. The architecture is varied and striking, with golden domed churches, and an astounding number of large and extravagantly decorated palaces, consistently evoking wows from visitors. The grandest include the countryside Peterhof, with its lavish gardens and majestic golden fountains cascading down to the Gulf of Finland; and the Winter Palace, within the complex of the Hermitage, one of the world’s largest museums, with a collection of some three million works of art and artifacts. Enjoy it on your own arrangements or via Azamara Land Discoveries.

Enjoy St Petersburg on your own arrangements or via Azamara Land Discoveries.

Enjoy St Petersburg on your own arrangements or via Azamara Land Discoveries.

Tallinn is the capital and largest city of Estonia, being home to one third of the country’s population. Despite occupation at one time or another by each of its near neighbours, Tallinn is independent-minded and has creative ways of showing it – consider the Singing Revolution of 1988, the massive musical demonstration against Soviet rule that set Estonia on the path to independence. Visit St Olav’s Church, once the tallest building in the world, at least until 1625. Then pull up a chair at one of the cafés in the charming town square, heart of the city for 800 years. After your coffee, explore St. Catherine’s Passage, a quaint old lane, home to a collection of craft workshops, and check out the secret 17th C. tunnel system. Enjoy it on your own arrangements or via Azamara Land Discoveries.

GOLF: Estonian Golf & Country Club opened in 2005 as part of the prestigious European Tour Properties network, and quickly and rightfully took its place in Golf World Magazine’s prestigious Top 100 European Courses, a spectacular achievement for a venue in an emerging golf nation. Its Sea Course hosted the Omega Mission Hills World Cup European Qualifier in both 2009 and 2011, with the International European Seniors Championship following in 2013 and the European Ladies’ Amateur Championship in 2014. Locals say that when God created the coastal land of the Estonian Golf & Country Club, he must have intended it to be a golf course as it winds its way so harmoniously along the Baltic Coast and the Jägala River delta.

Stockholm is the cultural, media, political, and economic centre of Sweden. It sports an appealing mix of modern Scandinavian architecture and fairy tale palaces, watched over by a Board of Beauty, responsible for preserving the city. One third of its area is devoted to green space, and another third to waterways, providing lots of room to breathe. Gamla Stan is the oldest section, retaining the medieval layout of narrow meandering paths. For the contemporary take there’s Sodermalm, known trendily as SoFo, with welcoming restaurants and pubs, specialty shops and boutiques. Stieg Larsson fans hang out here, as it is the area of the city where most action in the Millennium novels takes place. Enjoy it on your own arrangements or via Azamara Land Discoveries.

GOLF: Bro Hof Slott GC Stadium Course has built a reputation as one of the best golf courses in the world. Shortly after opening in 2007 the course which sits on spectacular grounds on the edge of Lake Mälaren was judged to be Sweden’s best. It now ranks 54th in Golf World’s top 100 worldwide list and is ranked the second best in Europe outside The British Isles. The Stadium Course is a “lakeside course” and a fabulous experience for any golfer. It also featured on the European Tour with Lee Westwood winning the 2013 Nordic Masters.

* All category 08 staterooms have an obstructed view. Please note even though Club Oceanview stateroom category 08 have obstructed views, these staterooms represent an excellent value. Each stateroom features a picture window providing natural light, you will find them comfortable and welcoming with all the amenities of an interior stateroom.

When you stay in a Club Interior Accessible Stateroom you will receive the following amenities:

When you stay in an Club Oceanview Accessible Stateroom you will receive the following amenities:

Specifically designed to be smaller and more sleek than most cruise ships, Azamara Quest, like her sister ship, Azamara Journey, is filled bow-to-stern with wondrous luxuries and appointments that enhance your voyage of discovery-making it one that you won’t soon forget.

A boutique cruiseline of distinction. Azamara's smaller ships reach unique destinations larger ships can't. With longer and more overnight stays so you truly immerse yourself in the places travelled. Azamara offers elegant accommodation, fine wines and dining with a host of complimentary amenities. Unmatched Amenities The unique offerings of Azamara are beyond compare: butler service is provided in every suite; shore excursions are designed to let guests become part of the fabric of life in each destination, instead of merely being an observer; the enrichment programs offer everything from culinary to photographic explorations; two specialty restaurants provide the finest cuisine at sea; live entertainment can be enjoyed nightly; and the level of personal service offered is unmatched. Smaller Ships - Out of the Ordinary Destinations Azamara Club Cruises consists of two intimate ships, Azamara Journey and Azamara Quest. Each can carry 694 fortunate guests to discover the hidden corners of the world that larger cruise ships simply cannot reach. In addition to offering a more personalized experience, the ships have recently undergone a $17.5 million revitalization including new European bedding and soft goods, flat screen televisions, new veranda decking and furniture, and wireless internet service in all staterooms and public areas. Plus, 93% of staterooms offer ocean views and 68% have a private veranda.

Why sail away with Azamara?

Experience the Azamara Difference. They don’t simply skim the surface but give their guests the opportunity to immerse themselves in the destination. Yes, you’ll have ample time to sample the cuisine, the shopping, the museuwms, and the monuments, but with longer stays in ports and more overnights you’ll also have time to discover the hidden treasures that tourists seldom see. Stroll down the Ponte Vecchio in Florence and witness the breathtaking sight of the bridge’s lights reflecting on the waters of the Arno below. Lovers of culture will be mesmerized by the traditional operas performed at the Mussorgsky Theater in Russia’s iconic St. Petersburg. Shimmering like a pearl in the moonlight, Bangkok truly comes alive at night with jazz clubs, trendy restaurants and shows ranging from the hedonistic to the spectacular. The truth is, you don’t really know a place until you know it by night, and Azamara’s longer stays and more overnights, offer you a one of a kind experience at an unbelievable value – that’s the Azamara Difference! With Azamara, you’ll love where they take you…   Founded: 2007   No. of Vessels   Demographic   Accommodation   Dining & Beverages   Entertainment   Cruise Price Inclusions   Awards, Honors and Accolades 2011 2010 2009