(Unfortunately information on this page may have expired. Please contact our specialists on travel@FirstClass.com.au or call 1300 30 80 81 for updates)

Highlights of Eastern Europe with Uniworld

An ideal voyage for travellers seeking new, off-the-beaten path destinations
Follow a path forged by crusaders, kings and conquerors through Hungary, Serbia, Croatia, Romania and Bulgaria. Immerse yourself in new cultures and make new friends as you travel from splendid Budapest to dynamic Bucharest, discovering the best that the revitalized nations of Eastern Europe have to offer along the way.

Gaze in wonder at the lofty spires of Hungary’s Parliament Building as it rises majestically above the Danube in Budapest. Sit down for friendly, intimate meals with farmers in Croatia and artists in Romania. Uncover scores of little-known treasures, including the picturesque Bulgarian hill towns of Veliko Tarnovo and Arbanassi and the surprising rock-hewn churches of Ivanovo—a UNESCO World Heritage Site. Step back in time to investigate the history and legends along the Danube while you cruise the Iron Gates. Tour Belgrade by bicycle, marvel at the massive People’s Palace in Bucharest or see Vlad the Impaler’s tomb in the Romanian countryside.

From Budapest to Bucharest, Roman ruins to medieval fortresses, this journey will reveal the unstoppable resiliency of the human spirit, as well as the highlights of this spectacular region. The adventure of a lifetime awaits you.

2020 cruises will be on the S.S. Beatrice
The S.S. Beatrice boasts yacht-style light wood with blue and white finishes throughout, a renovated lobby featuring elegant mirrors, marble floors, a white Murano chandelier with blue shades, and a grand staircase made of nickel and black iron – a signature design element of Uniworld’s Super Ships. The ship’s redesigned lounge features sofas and chairs with hand-made upholstery, a parquet floor and upholstered ceiling panels, solar shades, and new USB ports allowing guests to charge anywhere they are sitting. The artwork throughout the ship includes pieces from Pablo Picasso, Alexander Calder and Pino Signoretto.

* All prices quoted are PER PERSON based on twin share in Australian Dollars and include taxes, fees and port expenses (if applicable). All prices quoted are for the cruise departing on 10Aug20 on the River Duchess. Reverse direction also available. Certain departure dates and embarkation points may be at an additional supplement. For more information please contact one of our Travel Specialists.

Uniworld is proud to be a part of The Travel Corporation’s family of brands, which is why they are thrilled to announce the 100th Anniversary Celebration Event! Join Uniworld in celebrating TTC’s 100 years of excellence in hospitality in 2020 with savings of up to 30% on select 2020 voyages.

Celebrate with the most all-inclusive amenities finely tailored to your tastes.

Fly free to Europe or upgrade to business class from $3,999pp* or save $1,000pp on your cruise.
Offer is combinable with Uniworld’s 2021 Early Payment Discount offer. 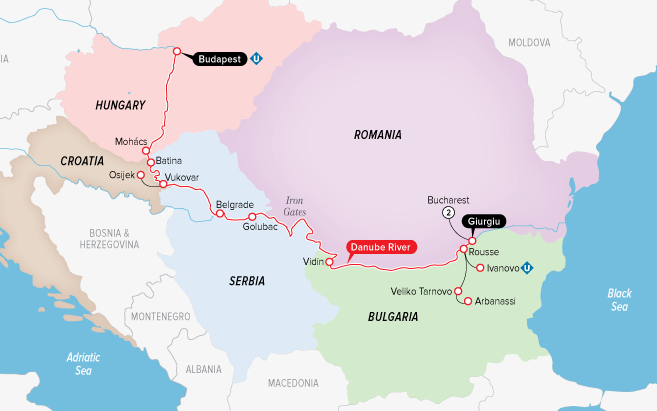 Note: The itineraries presented are subject to modification due to water levels, closures because of public holidays or other uncontrollable factors. Every effort will be made to operate programs as planned, but changes may still be necessary throughout the cruise. This day-to-day schedule is subject to change. Your final day-to-day schedule will be provided onboard on the first day of your cruise.

Arrive at Bucharest Henri Coandă International Airport. If your cruise/tour package includes a group arrival transfer or if you have purchased a private arrival transfer, you will be greeted by a Uniworld representative and transferred to the hotel.

At the end of a quiet, tree-lined street, is one of the wealthiest districts of Bucharest. There, sits a seemingly unassuming villa hiding a unique history, one that visitors have only been able to delve into since the building opened to the public in March, 2016. Today, you will have the distinct pleasure of exploring the extravagant interior and grounds of Ceausescu’s Palace for yourself, with a history lesson on its infamous former residents.

Bucharest is a fascinating combination of Communist grandiosity, elegant French-influenced 19th-century buildings and surprising survivors dating from the 1500s. Perhaps nothing more perfectly encapsulates Romania’s 20th-century experience than the mind-boggling People’s Palace, which you can visit today. Another option is a walking tour that shows you this city from a local’s perspective. Later, you’ll travel via motorcoach to Giurgiu, where your ship awaits.

In the evening, a special Captain’s Welcome Reception and Dinner will be prepared for you.

DAY 4: Rousse (Veliko Tarnovo and Arbanassi or Rousse and Ivanovo)

Bulgaria’s foremost Danube port, Rousse is sometimes called “Little Vienna” for its elegant 19th-century mansions and public buildings. You may choose to see some of the town after venturing to a pair of historic monasteries or spend the day visiting two historic hill towns.

Vidin is a port town on the Danube the once played an important role in medieval Bulgarian politics, as the great fortress Baba Vida attests. It’s your base for today’s featured excursion—a visit to the fascinating Belogradchik rock formations.

Today’s main attraction will be the spectacular scenery along the Danube, as you cruise a stretch of gorges known as the Iron Gates. Later, head ashore to explore a Paleolithic site and an extraordinary well-preserved medieval fortress. All along the way, history lines the banks of the river. Keep an eye out for Trajan’s Plaque, which the ancient Romans erected to commemorate the road they anchored in the steep cliffs above the water, and Golubac Castle, built in the 14th century and attacked successively by the Serbs, Magyars and Turks. The Turks won the castle in 1458, which helped to reinforce their control of the area until 1867, when they abandoned it.

Belgrade, the modern-day capital of Serbia, is one of Europe’s oldest cities, dating back some 7,000 years. Signs of its tumultuous history are visible everywhere, juxtaposed with the city’s vibrant modern-day present. See it all with a choice of excursions, either a city tour that visits the palace or a guided bike ride. You have two very different ways to see Belgrade today—the choice is yours!

Welcome to Croatia! This ancient country has made a remarkable recovery from a brutal civil war, and its beautiful countryside, colorful folk traditions and delicious rustic cuisine make it a most rewarding place to visit. You’ll dock in Vukovar, Croatia’s biggest port, at the confluence of the Danube and Vuka rivers.

Located on opposite sides of the Danube, Buda and Pest each has a distinctive character and allure all its own. Explore this dynamic and multi-faceted city with your choice of excursions—you can see it from a local’s perspective on our exclusive walking tour, or cover more ground with a panoramic tour. Vibrant Budapest, Hungary’s capital, offers an enchanting combination of East and West, old and new. Even its geography is made up of two parts—Buda (the hills) and Pest (the flatlands)—divided by the Danube. Which part will you choose to explore today? You have two options to choose from.

Disembark the ship. If your cruise/tour package includes a group departure transfer or if you have purchased a private departure transfer, you will be transferred to Budapest Ferenc Liszt International Airport for your flight home. Or you can extend your stay in beautiful Budapest with our exciting optional post-cruise extension. 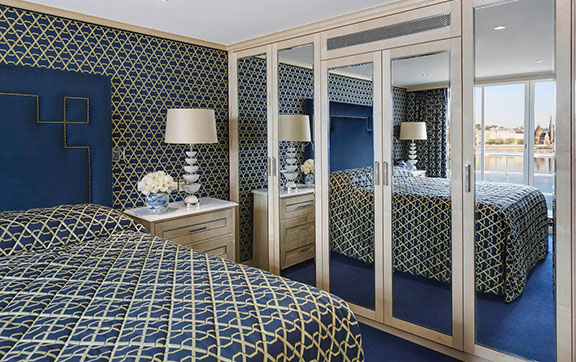 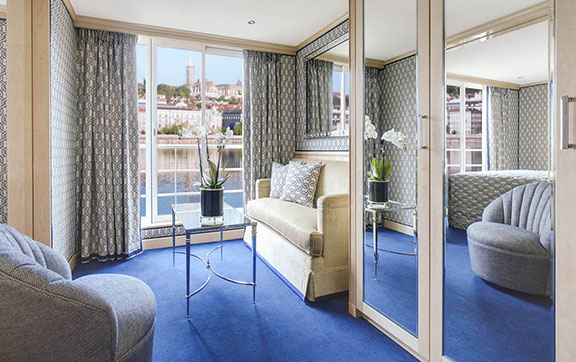 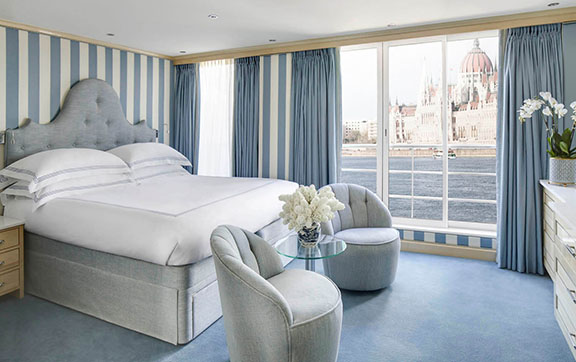 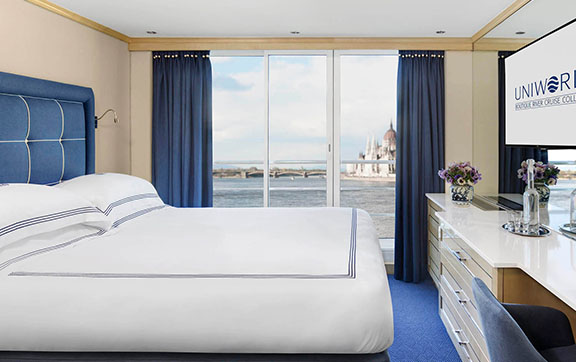 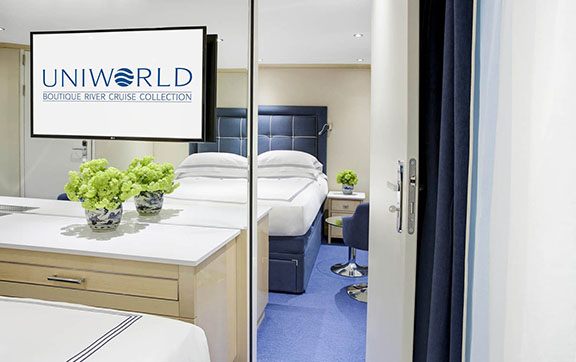 Lavishly appointed riverview staterooms and suites have handcrafted Savoir® Beds of England draped in high-thread-count 100% Egyptian cotton sheets and European duvets, along with a menu of pillow options.

Uniworld’s meticulously designed ships feature enticing public areas and luxurious amenities, including a lounge with full-service bar, well-equipped fitness center, restaurant, Serenity River Spa, and a Sun Deck where you can relax and take in the ever-changing views. Additionally, S.S. Beatrice has two new Grand Suites each measuring 310 square feet and a second 390 square foot Royal Suite. Connecting rooms, ideal for friends and families traveling together, have also been added. 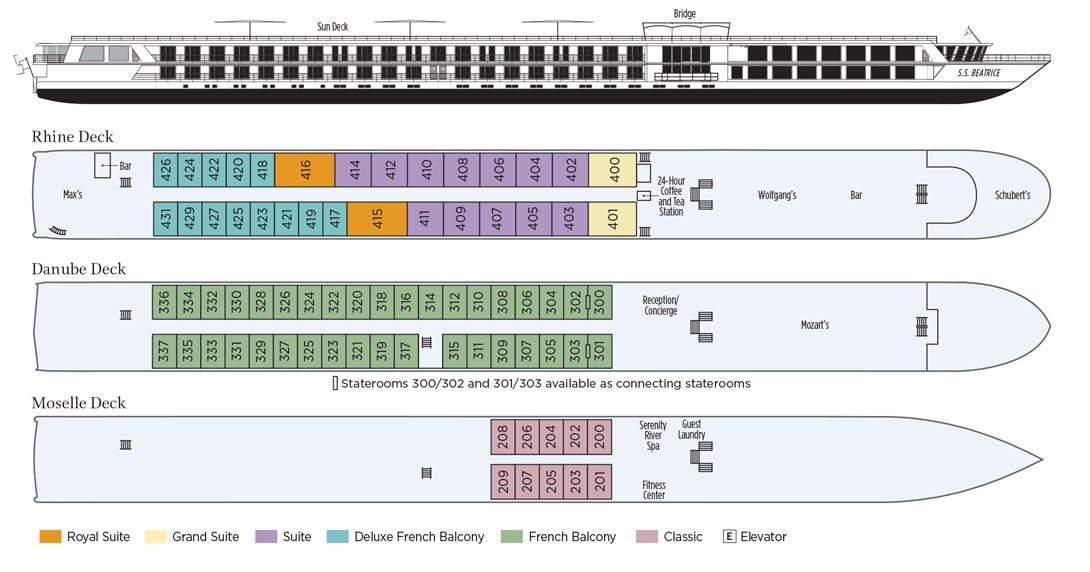