This itinerary adds a contemporary flair to the classic tulip time experience, where you’ll find an ideal mix of old and new, historic and modern, in some of Europe’s liveliest cities. You’ll spend time in Amsterdam and Maastricht, allowing you to discover great shopping, countless active options and mouthwatering foodie destinations. Explore Belgium’s historical and contemporary capital city of Brussels, home of a rich and vibrant culinary tradition. Discover Antwerp’s penchant for tasty treats, including Belgian waffles, beer, pralines and chocolate on a walking discovery tour of the diamond capital of the world. In splendid Maastricht, a city with hundreds of national heritage sites, you’ll uncover why it’s known as one of the most beautiful cities in all of Holland. Follow in Van Gogh’s footsteps with a stroll through Nuenen, where you’ll wander through the sites that inspired much of his art. Or venture into the town of Heusden and marvel at a historic working mill, learn to make bread at a local bakery, or wander through the remnants of a 13th-century fortress. Delight in a visit to Kinderdijk to see it’s 19 well-preserved windmills that have stood the test of time. In colorful Amsterdam, you’ll be treated to an exclusive “Morning with the Masters” visit without crowds to the Amsterdam Hermitage Museum–the perfect ending to an unforgettable journey.

* All prices quoted are PER PERSON based on twin share in Australian Dollars and include taxes, fees and port expenses (if applicable). All prices quoted are for the cruise departing on 21Mar21. Reverse direction also available. Certain departure dates and embarkation points may be at an additional supplement. For more information please contact one of our Travel Specialists.

Fly free to Europe or upgrade to business class from $3,999pp* or save $1,000pp on your cruise.
Offer is combinable with Uniworld’s 2021 Early Payment Discount offer. 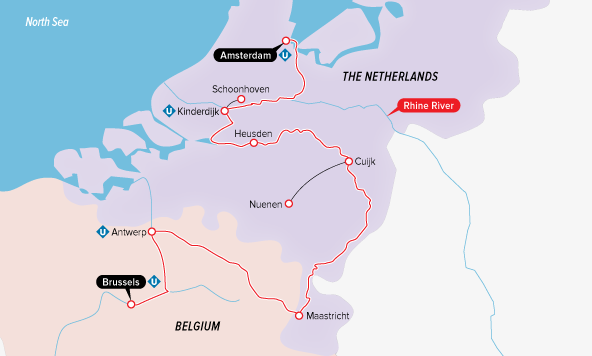 Note: The itineraries presented are subject to modification due to water levels, closures because of public holidays or other uncontrollable factors. Every effort will be made to operate programs as planned, but changes may still be necessary throughout the cruise. This day-to-day schedule is subject to change. Your final day-to-day schedule will be provided onboard on the first day of your cruise.

Arrive at Amsterdam Schiphol Airport. If your cruise package includes a group arrival transfer or if you have purchased a private arrival transfer, you will be greeted by a Uniworld representative and transferred to the ship.

The Netherlands’ largest city, Amsterdam has been an international port and financial center for 400 years, endowing it with a lively cosmopolitan feeling to match its historic architecture. The famous Keukenhof Gardens is a 70-acre park planted with millions of tulips and other flowers—an extraordinary sight in the spring. Spend the day here or enjoy an exclusive “Morning with the Masters” at the Amsterdam Hermitage Museum before it opens to the pubic for the day.

Bike around the town of Schoonhoven, best known for its silversmiths, abundant clock makers and quaint shop-lined avenues. Or venture forth to Kinderdijk to see its 19 well-preserved, UNESCO-designated windmills that were originally erected in the 1700s. Learn about the historical significance of these engineering marvels in the Netherlands’ long quest to hold back the sea. If you wish, you’ll have an opportunity to venture inside one of these iconic structures and marvel at Holland’s largest concentration of old windmills.

Follow in Van Gogh’s footsteps today as you stroll through Nuenen, where the artist once lived and painted “The Potato Eaters.” After lunch in an old water mill, which was even painted by Van Gogh, view the Hieronymus Bosch exhibit at the Noordbrabants Museum, or choose to walk or cycle through Heusden, where you can observe a working mill, learn to make bread at a local bakery, explore the remnants of a 13th-century fortress, and marvel at the memorial in front of town hall dedicated to the Heusden Town Hall Massacre.

Your next stop in the Netherlands— Maastricht—is a city with more than 1,670 national heritage sites, some of which can be seen on your Old Town walking discovery tour. And not only that, but it’s known as one of the most beautiful and romantic cities of Holland and loved for its convivial lifestyle and historic center, which has long played a strategic role in European politics. Or you can choose to make a pilgrimage to the 65-acre Netherlands American Cemetery and Memorial, the final resting place of 8,301 U.S. soldiers who perished during the Second World War. The cemetery is the only American military center in the Netherlands and sits near the famous Cologne-Boulogne highway that was constructed by the Romans for Caesar to use for his conquests. Choose to explore the beguiling banks of the Meuse River, the second oldest river in the world.

It may be the diamond capital of the world, but Antwerp is also known for many other sought-after cultural gems, including Golden Age art, Belgian beer, waffles, pralines, fries, chocolate and more. Your walking discovery tour of Antwerp features the City Hall, Market Square and the UNESCO-designated Cathedral of Our Lady, which houses four extraordinary works by one of the city’s most beloved sons—Peter Paul Rubens. At the old riverside dock area, there is a 19th-century warehouse that has been transformed into a restaurant and brewery where you can enjoy a beer tasting, specifically, Pakhuis’ unfiltered blonde beer.

Brussels, the capital of Belgium, offers a treasure trove of historic architecture, along with a rich culinary tradition, chocolate, and a vibrant culinary capital. Food lovers will be lured by the divine aromas drifting from delightful cafés and chocolate shops. After a panoramic tour of Belgium’s historical and contemporary capital city, get an up-close view of the city center with a guided tour on foot. Then, treat yourself to something delicious at Planet Chocolate, or visit Castle Groot-Bijgaarden, a magnificent Renaissance castle just outside of Brussels, where beautiful gardens open to the public for a few months each year–attracting some 50,000 plant lovers annually.

Disembark the ship in Brussels. If your cruise package includes a group departure transfer or if you have purchased a private departure transfer, you will be transferred to Brussels International Airport for your flight home. 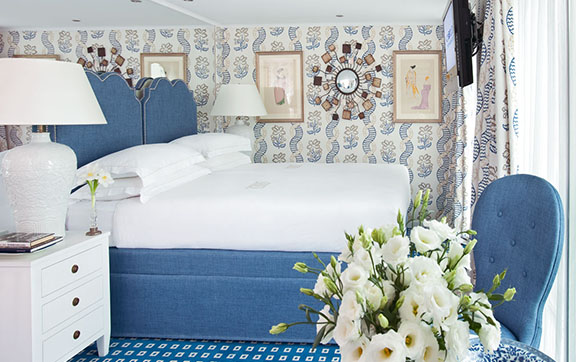 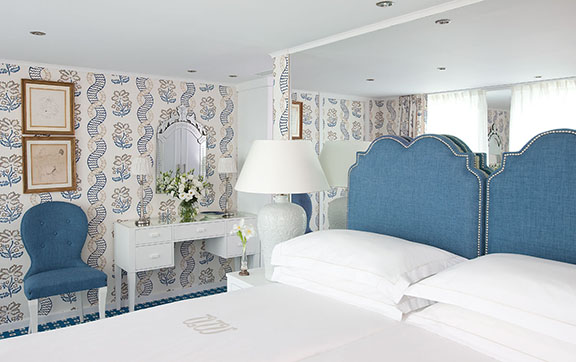 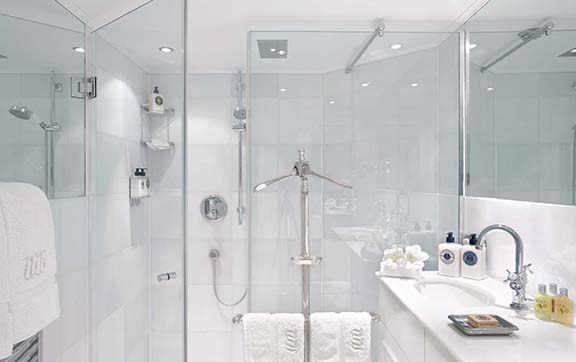 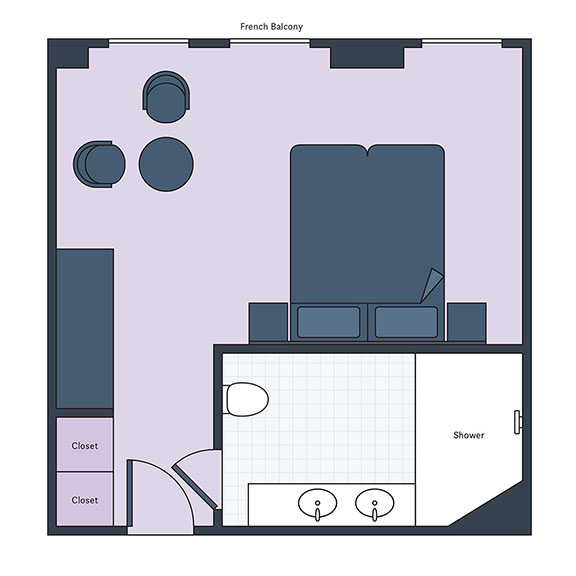 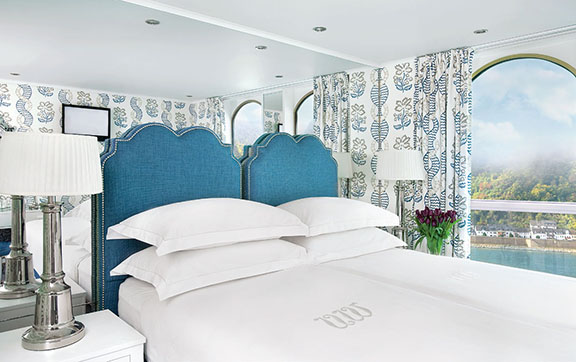 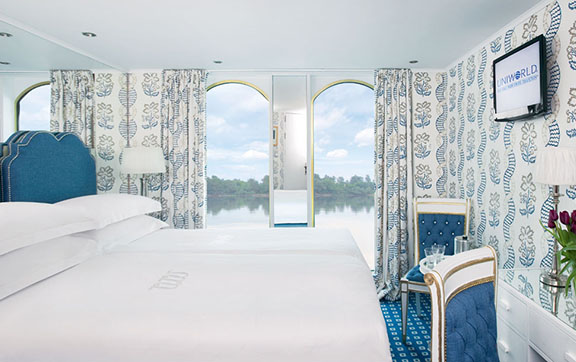 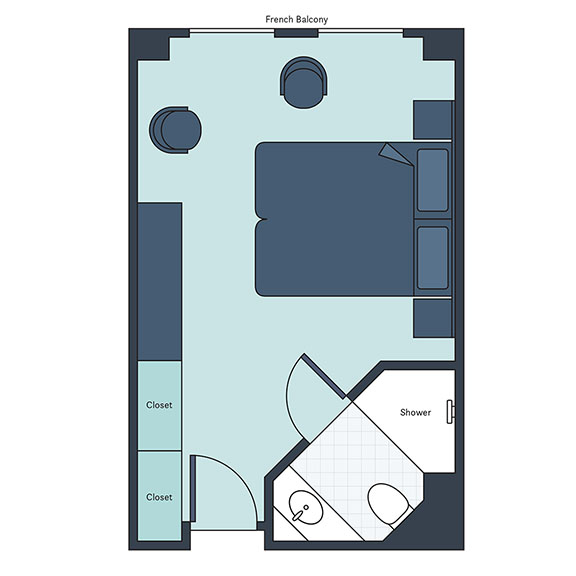 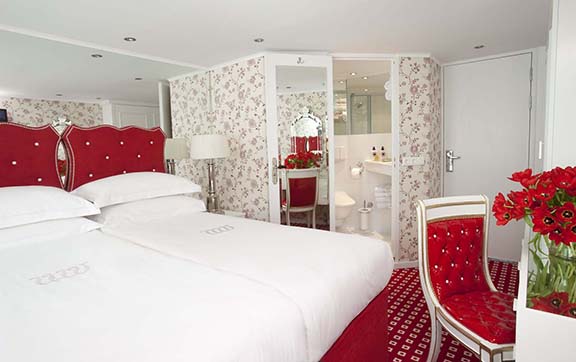 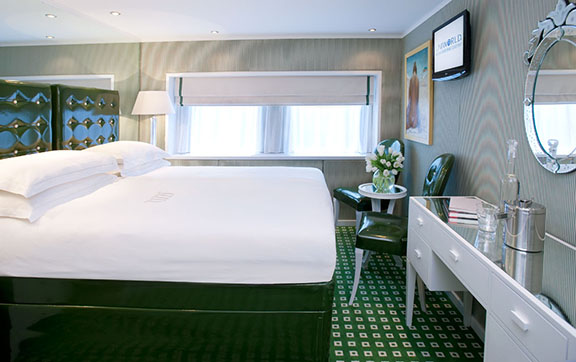 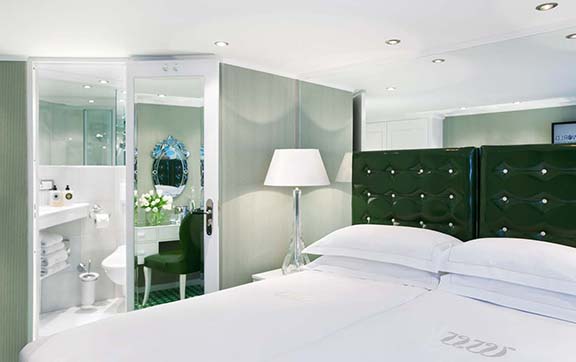 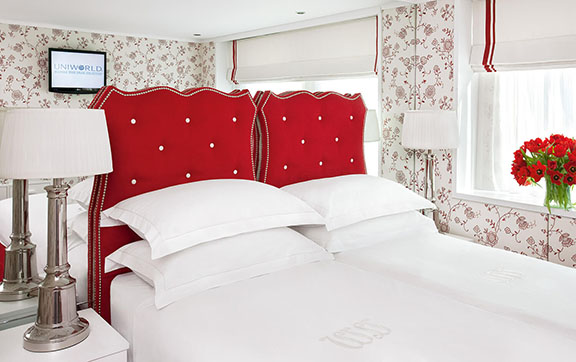 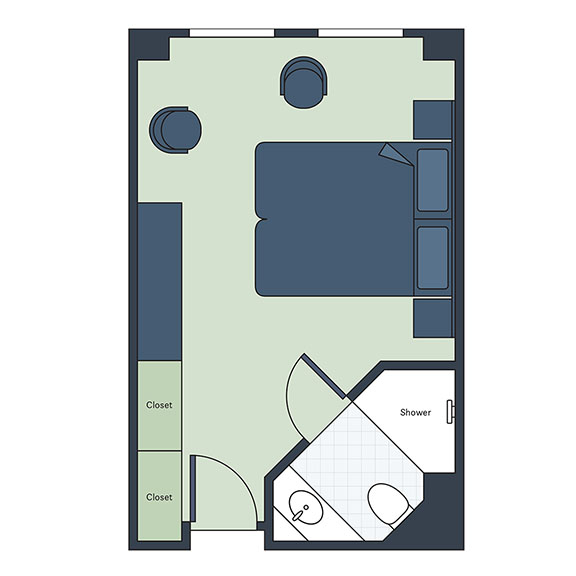 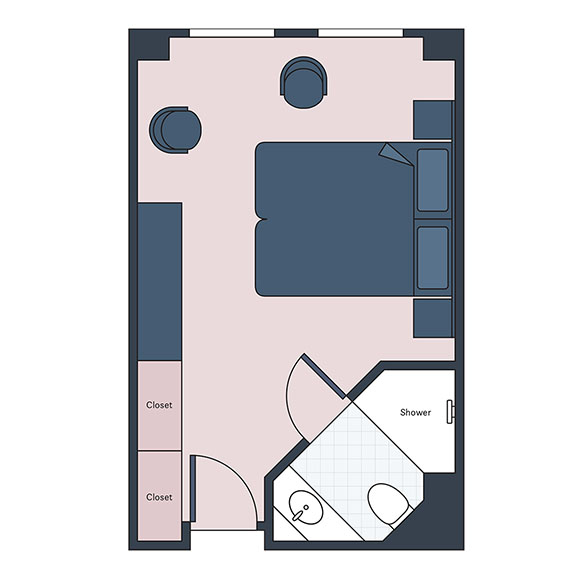 One of the most unique ships cruising Europe’s waterways, the River Queen has an exterior resembling the steamships of the 1930s and an elegant Art Deco interior. Decorated in richly textured blue and white fabrics—with marble bathrooms and inspiring artwork—River Queen is a sublime floating hotel designed with your every comfort in mind. River Queen was rated the #1 ship in the entire cruise industry (both river and ocean) in the 2012 Conde´ Nast Traveller Readers’ Cruise Poll.

Lavishly appointed riverview staterooms and suites have handcrafted Savoir® Beds of England draped in high-thread count 100% Egyptian cotton sheets and European duvets, along with a menu of pillow options. 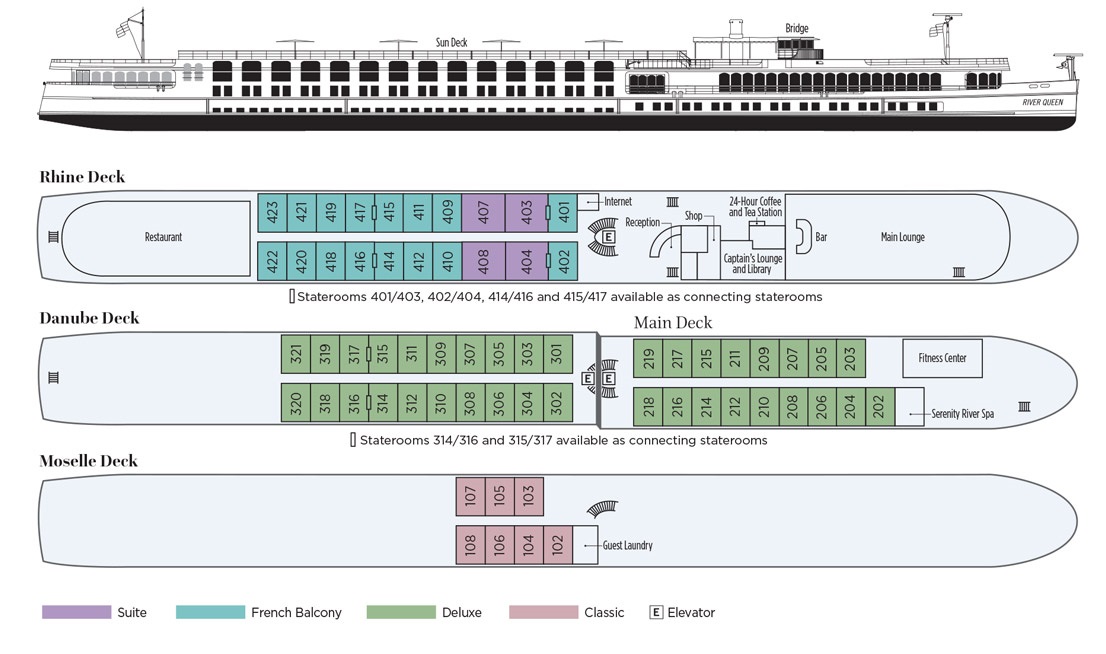