Housed in a beautifully restored colonial building, the iconic Raffles Hotel provides a relaxing getaway in the heart of the city. 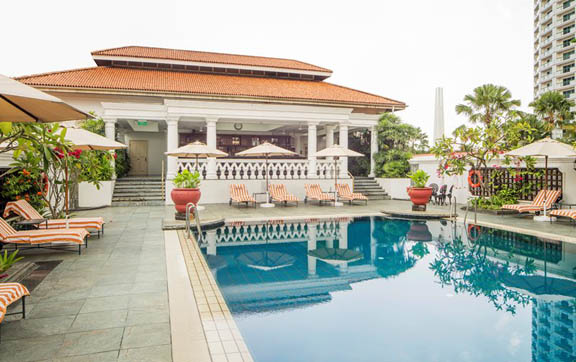 Declared a National Monument in 1987, the hotel has grown from strength to strength. With its restoration and reopening in 1991, Raffles Hotel today stands as a jewel in the crown of Singapore’s hospitality industry, renowned and loved for its inimitable style and unsurpassed excellence in service and facilities.

In multicultural Singapore it is not surprising that the visionary founders of Raffles Hotel were a quartet of enterprising Armenian brothers: Martin, Tigran, Aviet and Arshak Sarkies.

Raffles Hotel opened in 1887 in a rather sombre-looking old bungalow known as the Beach House. It was named after Sir Stamford Raffles, the founder of modern Singapore. Tropical suites and sola topis were as much a part of Raffles Hotel’s early style as bentwood tables and rattan chairs. Over the years the hotel has evolved into one of the world’s most beloved grand hotels and welcomed innumerable celebrities, writers and royalty.

Raffles Hotel is located in the heart of Singapore’s business and civic district, just 20 minutes from Changi Airport and a two-minute ride on the Mass Rapid Transit (train) from the bustling Orchard Road shopping strip. Raffles Hotel is within walking distance to Singapore International Convention & Exhibition Centre and Esplanade – Theatres on the Bay.

Singapore Airlines is Increasing Australia to Singapore Flights
Singapore has a slim schedule of flights but Brisbane, Adelaide, Melbourne [...]
A Breath of Fresh Air, or Not: Air Pollution in Holiday Destinations
With bushfire smoke choking New South Wales, we take a look at popular [...]
Regent Seven Seas Explorer coming to Australia and New Zealand
Over an acre of marble, crystal chandeliers, art works by Picasso - welcome [...]
The New Years You Never Knew: Asia’s Lunar New Year
Many Southeast Asian countries not only celebrate new years on a different [...]
Qantas Reintroduces First Class to Sydney-Singapore Route
Qantas is bringing back first class on the Sydney-Singapore route using its [...]