Directly across from Central Park it boasts unrivalled accommodations, first-class services and a variety of exceptional amenities 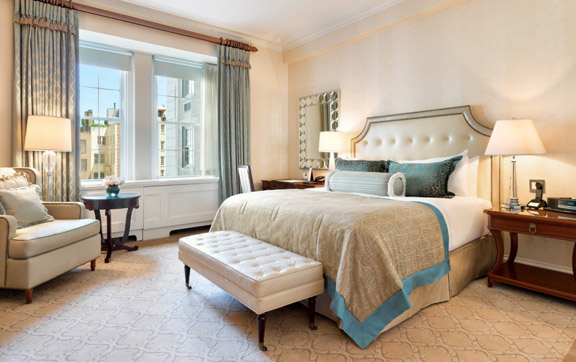 All guestrooms and suites have been transformed to feature a warm, inviting residential-style decor with a feeling of quiet luxury. High ceilings and abundant natural light evoke a gracious, airy experience that enhances the new interiors. Colour palettes, comprised of soft neutrals in pale ivory and taupe with tones or corals or blues, are contrasted with rich woods, tufted leather headboards and matching benches. Richly textured silk and brocade fabrics in elegant neutrals with tasteful accents of colour adorn upholstery, pillows, draperies and bed throws. Hand-carved carpets ensure comfort and superb acoustical sound control. The Pierre offers 140 stunning guest rooms and 49 magnificent suites all elegantly furnished and outfitted with luxurious bathrooms and the latest amenities.

The classic furnishings and elegant decor are complemented by the soaring ceilings of Superior Rooms.

With high ceilings, understated furnishings and Turkish marble-clad bathrooms offering deep soaking tubs, the Classic Rooms are the ideal choice for a luxurious stay in the city.

The Deluxe Rooms are situated between the ninth and 20th floors of The Pierre. Nestled in the lap of luxury and comfort, take in the scenic views of New York’s Upper East Side.

In City-View Rooms, you will find yourself amazed by the mesmerising skyline of New York City—dazzling by day but truly spectacular by night. Combine a room with a City-view Suite to create a two-bedroom space.

Witness the buzz and soak in the sights of the city that never sleeps, all from the quiet and elegant confines of the Park-view Rooms. The soaking tubs in the Turkish marble-clad bathrooms reinforce the experience!

The Signature Park View Rooms are a testimony to a commitment to chic, quiet sophistication, and reflect the ambience of a classic Manhattan residence with high ceilings and large windows. Enjoy spellbinding views from your haven. 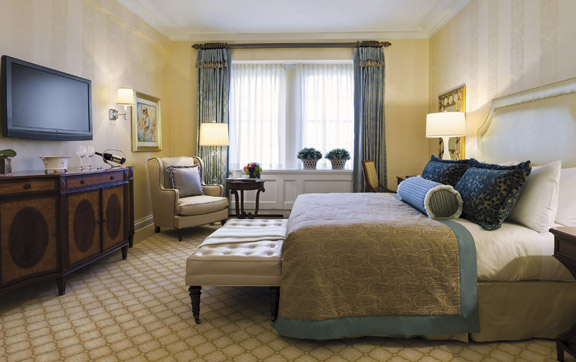 The luxurious residential-style interiors of Executive Suites are graciously appointed with elegant furnishings and rich fabrics. They are the perfect living arrangement for those in the city for business or pleasure.

City-view Suites are elegantly furnished, with richly textured fabrics and hand-picked artworks. With the abundance of natural light and a panoramic view of Manhattan, your experience will be nothing short of surreal.

Located between the 26th and 39th floors of The Pierre, the Premier Suites offer spacious living quarters. Most have a marble topped pantry with a microwave oven, wet bar and refrigerator, for all the comforts of home.

The Hutton Suite is named in honour of the industrialist EF Hutton, who helped finance The Pierre. His niece, the heiress Barbara Hutton, occupied it as her Manhattan pied a terre for five decades. Her gracious style influences the décor.

The newly refurbished Charles Pierre Suite has a spacious living room with an original 1920s fireplace and large modern leather sofas, a dining room, bedroom and bathroom. French doors lead you to a dramatic terrace.

A lovely foyer and decorative fireplace welcome you to the gracious Park Suite that overlooks the Wollman Skating Rink at Central Park. Murano glass and pale gold and cream tones distinguish the space.

August Escoffier, the father of modern French cuisine, created an elaborate menu for the grand opening of The Pierre and stayed on as guest chef for the first few months. The luxurious two-bedroom Escoffier Suite honours his refined taste. 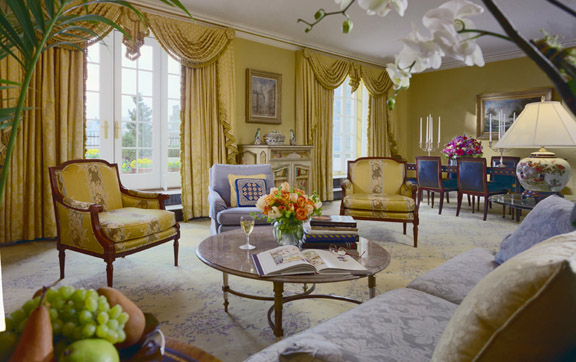 The first phase of the Pierre renovation was completed in January 2007 and included the Grand Ballroom, the Cotillion Room & Foyer. All banquet and meeting rooms are open, fully staffed and operative throughout the second phase of the renovation.

Even in a city where exclusive luxuries are the norm, there is one hotel that is far rarer and special than the rest. Possessing a fabled Central Park location and legendary history, The Pierre continues to set the standard for elegance and unrivalled hospitality.

The Pierre features the newest and most inviting guestrooms in the city. Staff outnumbers guests by a ratio of three to one, allowing the hotel to focus on anticipating a guest’s every need. In addition, London’s most fashionable restaurant is opening at The Pierre, attributing to a completely new experience, while preserving the warmth and understated elegance of The Pierre.

On the south-east corner of Central Park, at Fifth and 61st, you are at the beginning of Museum Mile, a short walk from the grand department stores of Fifth Avenue, and a stroll away from Madison Avenue boutiques, Times Square, and Broadway’s theatres. The Wollman Rink is right outside your door, and the Apple Store and major subways just two short blocks south. Perfect.

Check availability at The Pierre – A Taj Hotel or book now

Discover the World’s Best Wellness Retreats
Backed by ancient techniques and doctors on-site, we have compiled the best [...]
Australians Soon Able to Jump the Queue at US Border Control
Fast-track entry into the US might soon be on cards for Australian citizens
A Breath of Fresh Air, or Not: Air Pollution in Holiday Destinations
With bushfire smoke choking New South Wales, we take a look at popular [...]
Qantas to launch Brisbane to San Francisco flights February 9, 2020
The new Brisbane to San Francisco route will launch alongside the new [...]
Qantas: Non-stop flights to Chicago
Qantas has announced non-stop flights to Chicago from Brisbane which will [...]