Paradors of Northern Spain, 14 Days Barcelona to Lisbon with Tauck

Blessed with landscapes lush and lovely, Northern Spain entices with culinary specialties locally grown, cultural charms, unique to the region, and a history of paradors and pilgrimages continuing today. Discover an eclectic mix of Gaudí’s whimsical sites and Gothic grandeur in Barcelona; a mountain monastery in Montserrat and medieval menus in La Seu d’Urgell. See where the bulls run in Pamplona; the surfers ride in San Sebastian; and art goes wild in Balboa. Food and wine entice in Oviedo and in Santiago de Compostela, spiritual stories are the draw. Drive across the border to Portugal to sample port in Porto, college days in Coimbra and life in Lisbon before this two-week journey ends. Special Tauck experiences including a choice of spa treatment or cooking demonstration at El Castell de Ciutat; a 7-course feast set within a medieval castle; a visit to the monastery atop Montserrat; a wine tasting and lunch at a Porto winery, and a cruise aboard a Rabelo boat. 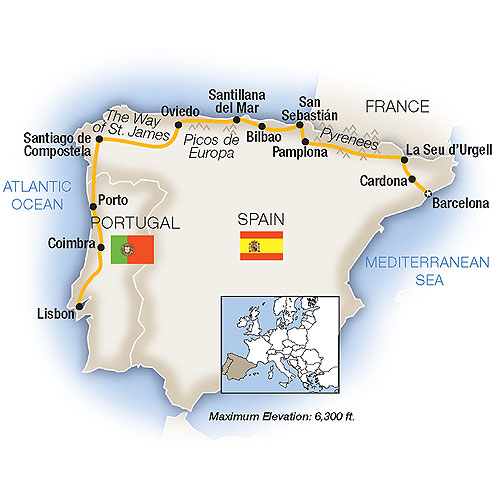 Welcome to Barcelona and Spain

Walk along the tree-lined pedestrian promenade of Las Ramblas this morning with a local guide who leads you through the cobblestone lanes of its 14th-century Gothic quarter, Barri Gòtic, a medieval warren of Roman relics, hidden courtyards, shops and alfresco cafés, to the Plaça de la Cathedral. Set apart from other churches, Barcelona’s Catedral was built between 1298 and 1460 although its richly decorated façade, guarded by gargoyles, was added in 1870. Go inside to see its medieval origins, from its exquisitely sculpted choir stalls and elegant pillars to the fine workmanship depicted on the pulpit and the alabaster sarcophagus of the crypt of Santa Eulàlia. Your city tour continues with a drive through hilltop Montjuic, rewarding with panoramic views, and a visit to Gaudi’s unfinished cathedral, la Sagrada Família, artistically and architecturally unique, and awe-inspiring in every detail. Spend the rest of the day exploring Barcelona as you wish.
Meals included: Breakfast
Accommodation: Le Méridien Barcelona

Montserrat, Cardona & on to the Pyrenees

Venture into the mountains today, stopping at the saw-toothed mountain of Montserrat, just northwest of Barcelona, to visit the Benedictine monastery and see the shrine of la Moreneta, the Black Madonna. According to the legend, the statue was discovered in the year 880 by shepherds who saw a strange light in the sky and heard music coming from a cave in the mountain. Since then, it has become one of the most famous pilgrimage sights in Spain. Continue on to Cardona for a visit to the Romanesque Church of Saint Vicenç, consecrated in 1047. Enjoy lunch in the medieval dining room at 9th-century Parador de Cardona, holding court over the countryside from its hilltop perch. Drive through the snow-capped Catalonian Pyrenees to your hotel in La Seu d’Urgell for a memorable two-night stay. Dinner tonight is at the hotel, with wine included.
Meals included: Breakfast, Lunch & Dinner
Accommodation: El Castell de Ciutat

A morning walking tour on the cobblestone lanes of La Seu d’Urgell brings you to the 12th-century Romanesque Cathedral, renowned as the finest in the Pyrenees. Following a traditional paella demonstration at lunch, you have a choice of a hike with a local guide, a Catalan cooking demonstration or a 30-minute massage in the hotel’s on-site spa. Feast on a seven-course wine-tasting dinner in a medieval 9th-century castle tonight.
Meals included: Breakfast, lunch & Dinner
Accommodation: El Castell de Ciutat

Drive to Pamplona this morning, immortalized in Hemingway’s famous book, The Sun Also Rises; walk the route followed during the running of the bulls as you visit here today. Then it’s on to coastal San Sebastián in Basque Country, where your first view of this popular oceanfront town is from the top of Mt. Igueldo. Regarded by many as Spain’s culinary capital, this ancient town also boasts great surfing beaches, stunning architecture and myriad pintxos bars tucked into the maze of medieval lanes in its old town of Parte Vieja.
Meals included: Breakfast & Dinner
Accommodation: Hotel Maria Cristina

A day in seaside San Sebastián

Join a local guide for a walking tour along the cobblestone streets of the historic Old Town (Parte Vieja) before exploring San Sebastián on your own. Sample typical Basque food and enjoy the many waterfront activities, including world-class surfing.
Meals included: Breakfast
Accommodation: Hotel Maria Cristina

Visit the iconic Guggenheim Museum in Bilbao this morning, discovering its collection of modern art as you wish. Designed by Canadian-American architect Frank Gehry, the museum is a showcase for large-scale, site-specific contemporary works of art by international and Basque artists, as well as exhibiting a selection of modern art from the Guggenheim Foundation’s collection. Continue on to the Cantabria region, stopping for lunch and time at leisure in the perfectly preserved medieval town of Santillana del Mar. Wind your way through hills and valleys to Oviedo this afternoon for an overnight stay at a restored 18th-century hospice that was featured in the movie Vicky Cristina Barcelona. Enjoy an artisan cheese tasting and wine pairing tonight.
Meals included: Breakfast, Lunch & Dinner
Accommodation: Hotel de La Reconquista

A pilgrimage centuries old to Santiago

Explore Oviedo on a walking tour this morning, seeing a mix of historic and artistic monuments, including two acclaimed churches built in the Astorian pre-Romanesque architecture when the rest of Europe was in the Dark Ages. Stop for lunch in a picturesque fishing village on the coast en route to your historic parador in Santiago de Compostela. Considered to be one of the oldest hotels in the world, it has welcomed travellers since the 15th century. Dine tonight at your choice of restaurants in the parador.
Meals included: Breakfast, Lunch & Dinner
Accommodation: Parador de Santiago de Compostela

When the grave of St. James the Greater was discovered in this region in the ninth century, hundreds of thousands began making the arduous pilgrimage along El Camino de Santiago – the Way of St. James – on foot to visit it. Legend has it that a bright star led a shepherd boy to the forgotten tomb of the apostle; today your local guide leads the way on a guided walking tour of the town’s historic quarter and a visit to the world-famous 11th-century Romanesque Cathedral of St. James, home to the relics of the saint. The rest of the day is free to spend as you like, walking in the footsteps of pilgrims who have made their way here from around the world for centuries.
Meals included: Breakfast & Lunch
Accommodation: Parador de Santiago de Compostela

Prosperous Porto on the Portuguese coast

Turn your clocks back one hour on a drive along the coastal route from Spain to Porto, Portugal. This ancient port city is nestled on the shores of the Atlantic Ocean at the mouth of the Douro River with a rich port-wine trading history. Enjoy a private visit and tasting dinner at one of Porto’s oldest port houses, learning about the history and processing of this prized fortified wine produced exclusively in Portugal’s Douro Valley.
Meals included: Breakfast, Lunch & Dinner
Accommodation: intercontinental Porto – Palacio Das Cardosas

A Rabelo cruise & more in Porto

Explore Porto on a walking tour, a panoramic drive along Avenida da Boavista and the coast where the river meets the sea and aboard a traditional rabelo boat on the Douro River. Look for Portugal’s iconic blue tiles (azulejos ) on the façades of many churches, buildings and inside the Sao Bento train station, once a convent. Visit the Church of Sao Francisco, built in the late 14th and early 15th centuries, where the interior is literally gilded in gold, and enjoy time at leisure to stop in Livaria Lello, considered one of the most beautiful bookstores in the world. On your cruise along the Douro River, your local guide will point out the sights you will see, including the six bridges that span the Douro, one of which was designed by Gustave Eiffel In 1877. The remainder of the day is yours to experience the delights of Porto as you like.
Meals included: Breakfast & Lunch
Accommodation: Intercontinental Porto – Palacio Das Cardosas

To Coimbra en route to Lisbon

Journey to the riverfront city of Coimbra today, the medieval capital of Portugal for over one hundred years and home to the historic University of Coimbra. A walking tour of the hilltop University campus includes a guided visit to the Baroque King John University Chapel. Home to some 60,000 ancient volumes in the study of law, philosophy and theology, the interior is a picture book in itself with rosewood, ebony and jacaranda tables, elaborately frescoed ceilings and gilt chinoiserie bookshelves. A look inside the ornate Baroque St. Michael’s Chapel, dating back to the 16th century and recently restored, reveals a brightly painted ceiling, stunning tilework on the floor, Manueline features and an 18th-century gilded organ with some 2,000 pipes which is still operational today. Stop in Pombal for lunch en route to Lisbon, where your evening is free.
Meals included: Breakfast & Lunch
Accommodation: Four Seasons Hotel Ritz Lisbon

It’s all about discoveries in Lisbon

Everywhere you look in Lisbon, Portugal’s beguiling capital city, you’ll see reminders of the “Great Period of Discoveries” – when Portuguese mariners set sail to explore the then-unknown world and found what is now Brazil, among other notable places. Guided sightseeing today includes the UNESCO World Heritage Site of Mosterio dos Jerónimos, commissioned by Manuel I to commemorate Vasco da Gama’s discovery of a sea route to India in 1498; today it houses da Gama’s remains in an ornately sculpted tomb inside the chapel and the Maritime Museum in its west wing. See the Tower of Belém, built on the bank of the Tagus River between 1514 and 1520, and the Discoveries Monument, honoring world explorers in stone, before spending an afternoon at leisure. Join us tonight for our farewell reception and dinner at your hotel.
Meals included: Breakfast & Dinner
Accommodation: Four Seasons Hotel Ritz Lisbon

Tour ends: Lisbon. Fly home anytime. A transfer from the Four Seasons Hotel Ritz Lisbon to Lisbon’s International Airport or Santa Apolonia Train Station is included. You should allow a minimum of three hours for flight check-in at the airport.
Meals included: Breakfast

*Rates are person based on twin share. Single supplements apply, please speak to one of our Travel Specialists for more information.

Discover the World’s Best Wellness Retreats
Backed by ancient techniques and doctors on-site, we have compiled the best [...]
A Breath of Fresh Air, or Not: Air Pollution in Holiday Destinations
With bushfire smoke choking New South Wales, we take a look at popular [...]
Uniworld to Build Four New Ships
The next three years will see four new luxury ships from boutique river [...]
Southern Spain: Granada, Ronda, and Seville
A culture full of festivals and flamenco, tapas and sherry, Southern Spain [...]
Portugal: History, Food & Unforgettable Port
Idyllic scenery and amazing food is just the beginning of an overall [...]