Per Person Twin Share
Discover the Alpines of Switzerland

Very few places on Earth offer as much breathtaking beauty – and outdoor adventure – as the Alps! Come along with Tauck Bridges on a weeklong Switzerland family holiday filled with discovery and family fun… from Lake Lucerne and Mount Pilatus in Switzerland… across the mountains aboard the Glacier Express to famous St. Moritz… into the Austrian Alps and Innsbruck… and on to the Bavarian magic of Munich! Go whitewater rafting, mountain bicycling, rock and rope climbing… enjoy a look at Neolithic life and traditional Tyrolean fun and games… ride cable cars and the world’s steepest cog railway at Mount Pilatus, more than 125 years in operation (summer only)… watch an exciting ski-jump demonstration and more! 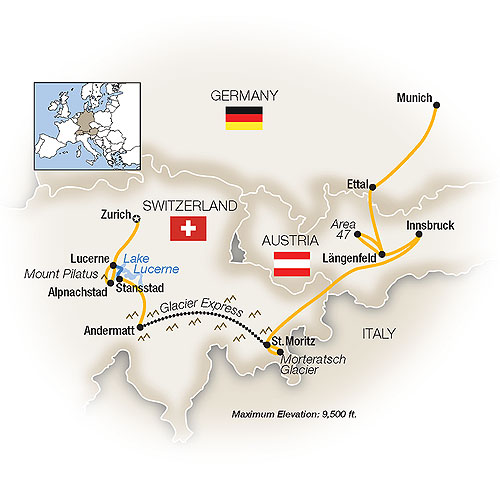 Arrive Zurich and on to Lucerne

Trip begins at 4:00 PM at Hotel Schweizerhof Luzern. Welcome to the Swiss Alps! A transfer is included from Zurich International Airport to Hotel Schweizerhof Luzern. Meet your Tauck Director and your fellow adventurers in the lobby of your grand hotel in the Old Quarter for a walking tour of Lucerne’s cobblestone streets, discovering the city’s spires, covered bridges, fountains and more. Tonight, join us for a private Tauck Bridges welcome reception and dinner at the award-winning Hotel Schweizerhof Luzern. Under the project titled “Wo Luzern Geschichte(n) schreibt” (Where Lucerne writes history/stories), every guest room has been allocated a guest with a unique story. They include great personalities such as thinkers, artists, politicians, athletes, musicians and crowned heads as well as unknown guests, whose stories are part of the hotel’s history.
Meals Included: Breakfast
Accommodation: Hotel Schweizerhof Luzern

Lucerne’s famous Löwendenkmal (Lion Memorial) pays tribute to the Swiss Guards who gave their lives in defense of the French king centuries ago; after visiting this Swiss national monument, head out to Alpnachstad to ride the world’s steepest cogwheel train up to the summit of Mount Pilatus. The mountain is a place of myth and legend; some say there be dragons living in the caves here… as well as the ghost of Roman governor Pontius Pilate! Later, descend via aerial cableway to Fraekmuentegg, where major fun awaits you at Switzerland’s biggest rope park*, the country’s longest summer toboggan run*, or a thrilling (but safe) giant tubing slide!* After riding a gondola to Kriens, head back to Lucerne to spend the evening as you please.
Meals Included: Breakfast & Lunch
Accommodation: Hotel Schweizerhof Luzern

Cruise Lake Lucerne & on to St. Moritz by rail

Feast your eyes on some of the world’s greatest scenery today… first on a cruise across lovely Lake Lucerne, and then aboard the famous Glacier Express for what many call the most scenic rail trip in Europe – winding its way through lush Alpine valleys dotted with little villages… the real Switzerland! Arrive in the popular resort town of St. Moritz for a two-night stay in the Engadine Valley.
Meals Included: Breakfast, Lunch & Dinner
Accommodation: Kempinski Grand Hotel Des Bains St. Moritz

Start another exciting day in the Alps by climbing up Piz Diavolezza via cable car… you won’t believe the views of the Engadin Valley and its many lakes stretching out below you. Then it’s off to the Morteratsch Glacier for guided mountain hiking*, rock climbing* and abseiling* (descending via ropes)… a visit to an Alpine cheesery for lunch in a meadow and a look at cheesemaking… and a few surprises!* If you wish, hop aboard a mountain bicycle* for a ride back through the Engadin Valley to St. Moritz, where your evening is free to enjoy as you please
Meals Included: Breakfast & Lunch
Accommodation: Kempinski Grand Hotel Des Bans St. Mortiz

Say goodbye to Switzerland and head across the Alps into Austria. Arrive at Innsbruck – the 15th-century capital of Emperor Maximilian I’s Habsburg Empire, and more recently the host of two Winter Olympic Games in the 20th century. Join your local guide for a walking tour of this idyllic Alpine city, during which you just might “meet” old Emperor Max and his wives. The afternoon takes you to Innsbruck’s high-tech Bergisel ski-jump complex, designed by star architect Zaha Hadid, for a demonstration of the difficult and daring art of ski jumping. Then it’s on to your Alpine spa hotel in Längenfeld – the AQUA DOME – offering aquatic fun for the whole family with a pool, waterslides, spa, sauna, thermal baths and fitness center.
Meals Included: Breakfast & Dinner
Accommodation: Acqua Dome – Tirol Therme Langenfeld

Get wet and wild on your Switzerland family holiday today in Austria’s Ötztal Valley during a trip to Area 47, one of the largest adventure parks in the Alps, and Europe’s ultimate outdoor playground. Jump into a neoprene suit and helmet, and head out on a whitewater-rafting adventure*; then do some swimming or try out the slides and other attractions of one of the newest and biggest water parks on the Continent. Following a free afternoon, join us tonight for an after-hours visit to Oeitzidorf, an open-air museum and archaeological site in the Oetzi Valley, interpreting village life during the time of “Oetzi” – the Neolithic Age of about 5,000 years ago – followed by dinner and a memorable evening of Tyrolean fun, games and activities!
Meals Included: Breakfast, Lunch & Dinner
Accommodation: Aqua Dome – Tirol Therme Langenfield

Depart Austria and cross the German border into Bavaria, where you’ll arrive in the village of Ettal this morning for your choice of a guided mountain hike of the area with a park ranger, or a visit to Ettal Abbey. A Benedictine monastery established in 1330 and later rebuilt in the Baroque style after a fire in the 18th century, the abbey is one of Europe’s largest Benedictine residences; your family’s visit (should you choose it) includes tours of the abbey church, as well as its distillery and brewery (with tastings for the adults). After lunch, continue on to Munich, Bavaria’s capital city. Cap your memorable family Alpine holiday with tonight’s farewell dinner in the historic Palais Keller – once a 15th-century salt store – beneath your landmark hotel in the heart of the city, the Bayerischer Hof… a perfect base from which to explore more of Munich as you please.
Meals Included: Breakfast, Lunch & Dinner
Accommodation: Bayerischer Hof

Trip ends: Munich. Fly home anytime; a transfer is included from the Bayerischer Hof to Munich Airport. You should allow a minimum of 3 hours for your flight check-in.
Meals Included: Breakfast

Children under 18 must be booked in a room with at least one adult. Quadruples will be accommodated in two double rooms.

Recommended age: 8+. Children must be 8 or older to participate in activities requiring a waiver & must be accompanied by a parent or guardian.

Note
: For activities marked with an asterisk (*) in day-by-day descriptions, participation is at your own risk; a signed liability waiver will be required.

*Rates are person based on twin share. Single Supplements apply, for more information please speak to one of our Travel Specialists.