The Hudson Valley, 10 Days Montreal to NYC with Tauck

Like the luminous landscapes of 19th century artists like Thomas Cole and Asher Durand, the Hudson River has the power to enthrall with its deep forests, plunging waterfalls, wandering tributaries, cliffs and rugged mountain vistas… not to mention the cultural currents, castles, vineyards and fabulous estates that follow its wandering path down from Canada to the sea. Enjoy exclusive filmed vignettes by filmmakers Ken Burns and Dayton Duncan that share personal stories and take you behind-the-scenes of their films such as The Roosevelts and Brooklyn Bridge.

Discover the heart, soul and history of this legendary waterway on a Hudson Valley tour that begins in romantic Montreal and winds through the rugged beauty of the Adirondacks… rambles in Lake Placid (with an Olympic ski jump demonstration), the farm of John Brown and an island retreat at Lake George… a cruise down the river to West Point… visits to the historic estates of the Rockefellers and the Roosevelts, a wine tasting, and overnight stays at elegant lakeside resorts and lodges… with the final stop at New York City and the electrifying Crossroads of the World. 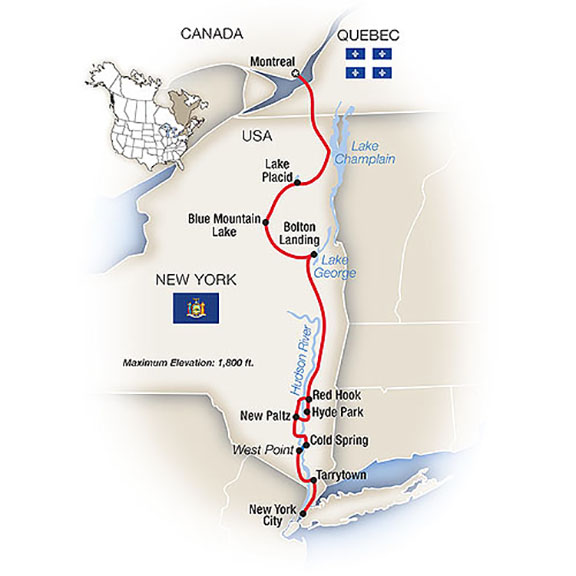 Your Hudson Valley tour begins with an exploration of romantic, beguiling Montreal; from gleaming skyscrapers to the timeless charm of 17th-century cobblestone lanes, this morning’s city tour introduces the highlights of this dynamic bilingual city, a medley of European and North American influences. Views include McGill University’s downtown campus, which prides itself on drawing “no line between university life and the real world” and Mont Royal, the iconic summit and landscaped park visible from all parts of the city. In Old Montreal, between the St. Lawrence River and downtown skyscrapers, stroll with your guide through narrow streets that date back to the city’s founding in 1642. Galleries, cafés, shops and museums keep it a still-vibrant part of the city. Following lunch, depart Montreal for a drive through Québécois farmland to the U.S. border crossing and on through countryside that satiates with mountain views, foothill farms and orchards. A short stop at Ausable Chasm (a sandstone gorge two miles long carved by the Ausable River) reveals nature’s power in the roar of waterfalls set deep within towering cliffs; this natural wonder known as The Grand Canyon of the East was a major tourist draw in the 19th century. Your final destination is a classically elegant white clapboard resort and spa on Lake Placid; dinner is on your own tonight.
Meals Included: Breakfast & Lunch
Accommodation: Mirror Lake Inn Resort & Spa

The day begins serenely on a private boat cruise on Lake Placid, described as “a clear, cold jewel” in the Adirondack wilderness, and then steps up in pace at the Lake Placid Olympic Center. Watch the thrilling hurl-into-flight during a ski-jumping demonstration and drink in the area’s beauty over lunch – served in a private room at the top of a ski jump tower. Afterward, visit the nearby John Brown Farm, the historic home and burial site of the abolitionist who led the ill-fated raid on the federal arsenal at Harper’s Ferry in 1859, prior to the start of the Civil War. Return to your hotel for time at leisure; a leisurely walk along Mirror Lake, the views from an Adirondack chair, and the alpine village of Lake Placid are all at your disposal. Have dinner at the hotel tonight.
Meals Included: Breakfast, Lunch & Dinner
Accommodation: Mirror Lake Inn Resort & Spa

A year-round playground for outdoor enthusiasts, the Adirondacks’ rugged mountains and vast forests have also long been home to lakeside villages and quaint towns. A drive through the region’s beauties ends at Blue Mountain Lake, home to the renowned Adirondack Museum, where modern galleries and historic buildings tell the unique story of the Adirondacks’ residents – how they have lived and worked, from logging to mining and railroads, and played – from hiking, to rock climbing, skiing and snowshoeing – over time. After lunch, stunning scenery continues on a drive to your accommodations, a gorgeous resort lodge in Bolton Landing on the shores of a private island at Lake George.
Meals Included: Breakfast, Lunch & Dinner
Accommodation: The Sagamore Resort

From Lake George, head south through rolling countryside that is home to small farms, wineries and villages, with a stop in the resort town of Saratoga Springs. Continue on to Olana State Historic Site in Greenport, the former riverside home of noted 19th-century Hudson River School landscape painter Frederic Edwin Church and his wife Isabel, for a Tauck Exclusive private visit including lunch in the Wagon House. Much of the estate, a National Historic Landmark, was designed by Church himself – including the eclectic Orientalist central villa, featuring a mix of Persian, Moorish and Victorian styles; and the sprawling, parklike grounds offering remarkable views of the Catskills, the Taconics and the Hudson Valley, as well as a working farm. Preserved much as it was during Church’s lifetime, the estate displays many exotic objects collected by the Churches on their world travels, as well as some 40 paintings by the artist and his contemporaries. Your final destination is Mohonk Mountain House, a Victorian “castle” set on forested cliffs above Lake Mohonk – a resort once frequented by presidents, celebrities and turn-of-the-century industrialists, where you’ll spend the next two nights
Meals Included: Breakfast, Lunch & Dinner
Accommodation: Mohonk Mountain House

Fantastically wealthy retreats of statesmen and robber barons preside on the cliffs along the river like castles on the Rhine, and your Hudson River tour includes visits to several of the most famous of them. Explore the Roosevelt National Historic Site today at Hyde Park, the lifelong home of Franklin D. Roosevelt and his summer White House. A guided visit to Springwood, the family mansion, offers a window into an American way of life modeled on an English country estate – where the lives of the domestic staff and the home’s relationship to the local community were an integral part of the story. Afterward, a stop in historic Rhinebeck along the Hudson leaves time for lunch on your own and a chance to wander through a town designated as a National Landmark District and an au courant reputation for arts and culture. Return to Mohonk Mountain House late afternoon and have dinner at the hotel.
Meals Included: Breakfast & Dinner
Accommodation: Mohonk Mountain House

This morning features an upscale 19th-century view of Hudson Valley life on a visit to critically acclaimed Boscobel Mansion. Completed in 1808, this elegant home was built by a gentleman farmer (and British loyalist) who furnished his home from the most fashionable shops in London. A century later, the house lingered in a state of neglect until local architects and citizens rallied efforts for its rescue in the late 1950s. A tour of the house brings with it a trove of Federal antiques, spectacular Hudson views and the story of its rescue. Next up, get a close-up view of the Hudson River itself on a cruise from Cold Spring to West Point. See the military academy on a guided tour that tells the story of its historic role in the Revolution, the contemporary experience of its cadets, and of those who have left their mark here – including George Washington, Robert E. Lee, Douglas MacArthur and Dwight Eisenhower. Your accommodations tonight are in the historic town of Tarrytown, where Washington Irving’s Ichabod Crane first encountered the Headless Horseman; the author of The Legend of Sleepy Hollow and Knickerbocker Tales did much to enlarge the myths, legends and Dutch history you’ll find on this segment of your Hudson Valley tour.
Meals Included: Breakfast, Lunch & Dinner
Accommodation: Doubletree by Hilton Tarrytown

Named after the Afrikaans word for “lookout,” Kykuit was the name given by John D. Rockefeller to his six-story stone mansion (on 3,000 acres) which looks impressively out over the Hudson River and the New York skyline in the distance. This morning’s visit takes you through terraced gardens, where fountains, pavilions and sculptures include the work of Alexander Calder and Henry Moore, and art galleries featuring 20th-century art. Hear stories of the Rockefeller legacy in business, government, philanthropy and the arts. After lunch on your own, depart for the final, but certainly no less dramatic, leg of your Hudson River tour: a two-night stay at Le Parker Meridien, just steps away from New York City’s Central Park; explore on your own tonight in the heart of the “Big Apple.”
Meals Included: Breakfast
Accommodation: Parker New York

Feel the energy of Manhattan on this morning’s New York City tour, accompanied by a local expert who maps out landmark sights and the stories behind them. Head to Lower Manhattan to view St. Paul’s Chapel and the 9/11 Memorial, honoring those who were lost – and expressing hope for the future; in a Tauck Exclusive, meet an NYPD detective who interprets the poignant events of September 11th and the subsequent recovery efforts. See Rockefeller Center, Times Square, Radio City Music Hall, and the Chrysler and Empire State buildings. Next up is an unobstructed view of the city’s sensational man-made peaks and valleys, from 70 floors up; a visit to the Top of the Rock atop a Rockefeller Center skyscraper includes the story of its construction, which put thousands of people to work just after the 1929 stock market crash – an initiative credited to John D. Rockefeller. Tonight, please join us for a farewell reception and dinner at the hotel.
Meals Included: Breakfast & Dinner
Accommodation: Parker New York

Australians Soon Able to Jump the Queue at US Border Control
Fast-track entry into the US might soon be on cards for Australian citizens.
A Breath of Fresh Air, or Not: Air Pollution in Holiday Destinations
With bushfire smoke choking New South Wales, we take a look at popular [...]
Qantas to launch Brisbane to San Francisco flights February 9, 2020
The new Brisbane to San Francisco route will launch alongside the new [...]
Qantas: Non-stop flights to Chicago
Qantas has announced non-stop flights to Chicago from Brisbane which will [...]
British Airways to Launch New Club World Seats in 2019
British Airways' highly anticipated Club World seats to arrive in 2019.