The Tour at a Glance: 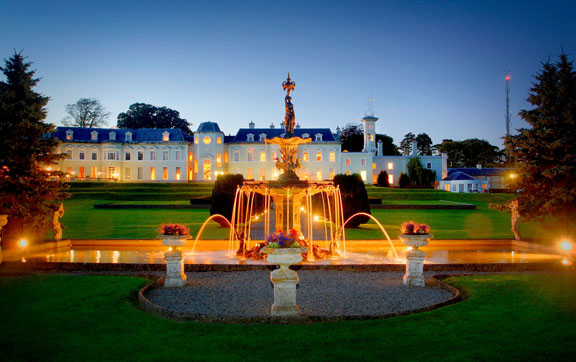 On arrival, clear International Customs or for those that have arrived earlier, meet at Dublin Airport where one of the representative’s from Kerry Coaches will accompany you to the luxury G+ Class coach for your transfer (45 mins) to the hotel. The coach is set up for a fantastic travel experience with such features as reclining seats, two refrigerators, four tables, servery area, DVD player, toilet, and Wi-Fi connectivity.

The luxurious 5-star deluxe K Club, located in Straffan, County Kildare, will be your home for the next three nights. Steeped in history, the K Club combines old-world elegance with indulgent luxury – the ultimate country escape for discerning guests.

After check-in relax in your beautifully-appointed guest room, work out in the fitness center, or explore the other activities at the K Club.

This evening you will meet for you Welcome Dinner (included) hosted by Smokey and Matt, where everyone will discuss the adventure that lies ahead. 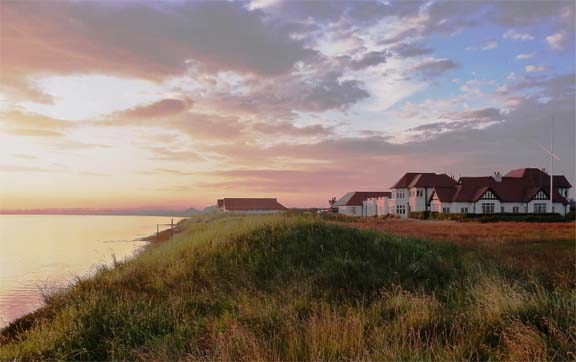 A full Irish breakfast will be available bright and early before your day of golf begins at Royal Dublin Golf Club (45 mins).  The second-oldest club in Ireland, Royal Dublin celebrates its 134th anniversary in 2019.  Rated as number 13 of the 246 True Links golf courses worldwide, this traditional course is said to offer “a tough, but fair test of golf”.
European Course Ranking: Top 60

Enjoy your full Irish breakfast before departing for Portmarnock Golf Club (45 mins).  Located on a picturesque curve of coastline, Portmarnock sits majestically on a narrow tongue of shallow dune land. Established in 1994, it remains one of the most respected venues in world golf with its rich history of events which include the Canada Cup, the Walker Cup and 19 editions of the European Tour’s Irish Open.
World Course Ranking:
44
European Course Ranking:
Top 30 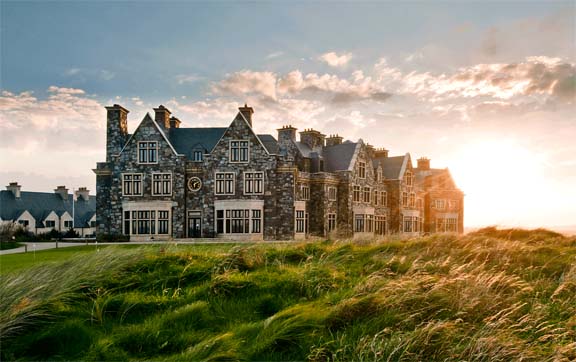 Your final Irish breakfast at K Club is followed by check-out and then transfer (2½ hrs) to the renowned 5-star deluxe Trump Doonbeg Resort, in Doonbeg, County Clare, for a two night stay. Offering the utmost in traditional luxury and refinement, Trump Doonbeg’s suites are beautifully appointed with curated furnishings, art, and antiques.

This afternoon you will be taken on the newly redesigned course at the Doonbeg Golf Club.  With views of the Atlantic from 16 of the 19 holes, the course meanders through the sand dunes offering a stunning and unusual combination of five par 3s, five par 5s, and eight par 4s. You will find the speed and direction of the wind will definitely add to the challenge of the course.
European Course Ranking:
Top 40 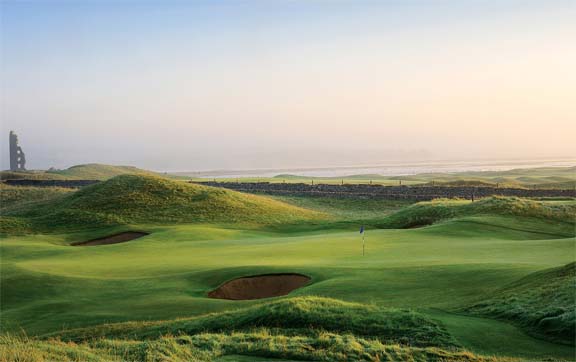 Following breakfast, full Irish of course, it is off to Lahinch Golf Club (30 mins).  Often described as the Saint Andrews of Ireland, located on the edge of Lahinch Bay, lies one of Ireland’s best known and best loved links courses. Lahinch, with its towering dunes and stunning ocean views, is renowned for retaining all of the old virtues conceived by Old Tom Morris and then perfected by celebrated architects Charles ‘Mo’ Gibson and Dr Alister McKenzie.
World Course Ranking:
31
European Course Ranking:
Top 20 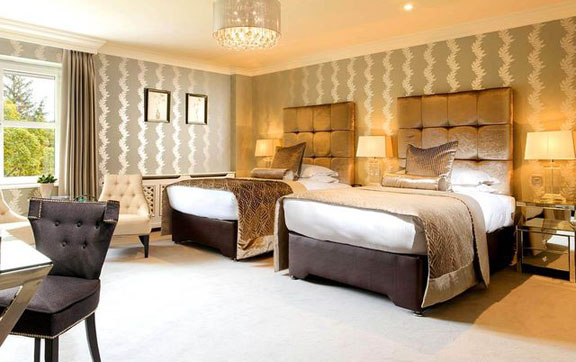 Ballybunion Old Course (2 hrs) beckons after a sumptuous Irish breakfast.  If sheer pleasure is your yardstick, then Ballybunion’s Old Course is the star in the firmament of great links golf courses. On the Old Course you enter a timeless world where the buzz of modern life fades and the charms of Ballybunion take over.  As Tom Watson said after accepting the Claret Jug at Royal Troon in 1982, “Nobody can call himself a golfer until he has played at Ballybunion; you would think the game originated there.”
World Course Ranking: 20
European Course Ranking: Top 10

Returning to the real world you will join your coach once again and head for Killarney in County Kerry (1½ hrs).  The 5-star Deluxe Killarney Park Hotel is your home for the next four nights.  This award-winning hotel, in the very heart of Killarney town centre, is set in mature grounds and framed by the legendary surroundings of Killarney National Park. This is a 5-star hotel like no other, where old-world elegance meets modern-day luxury, where you can look forward to the solace and comfort of a real log fire, and the very best of Killarney hospitality and service.

After five days of unforgettable golf, it’s time for some well-earnt R&R! After breakfast you are off to one of the most beautiful and spectacular parts of Ireland – Dingle Peninsula. The luxury coach will stop in both Slea Head and Dingle. One of the highlights of the day is your visit to the Dingle Distillery (included), a small artisan distillery producing Malt and Pot Still whiskeys, as well as gin and vodka. Although they only began distilling whiskey in 2012, making it Ireland’s youngest distillery, Dingle won Ireland Distillery of the Year in the 2017 New York International Spirits Competition. 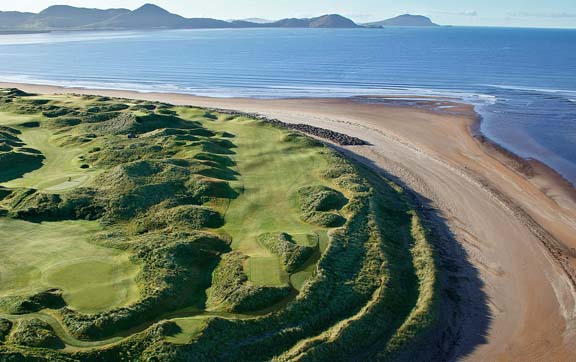 Today everyone will take on yet another one of Ireland’s superb courses. After breakfast everyone will head off to Waterville Golf Club (1½ hrs). Rated as the number 3 course in Ireland and 84 in the world, Waterville, with its panoramic sea and estuary views, promises an unforgettable experience. The slightly flatter front nine  runs down to the River Inn Estuary, while the back nine takes you deep into the impressive dunes. The closing three holes, which feature breathtaking views and refreshing winds, run alongside Ballinskelligs Bay to the Atlantic Ocean and O’Grady’s Beach.
World Course Ranking: 84
European Course Ranking: Top 50 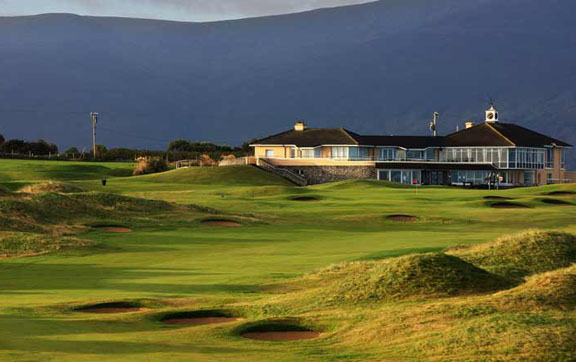 “I have never come across a piece of land so ideally suited for the building of a golf course” – Arnold Palmer, legend and designer of Tralee, his first course designed in Europe. Following breakfast it is a short 45 minute trip to Tralee Golf Club where, according to folklore, Palmer designed the first nine holes and Mother Nature did the rest. With so many great holes, it is hard to single one out, however the 200 yard par 3 third, called “The Castle”, is considered the signature hole. Your line will be the iconic castle in the background as anything right is eaten by the rocks and the sea!  The memorable seventeenth is called “Ryan’s Daughter” because the dramatic landscape was featured in the award-winning movie of the same name.
European Course Ranking: Top 50 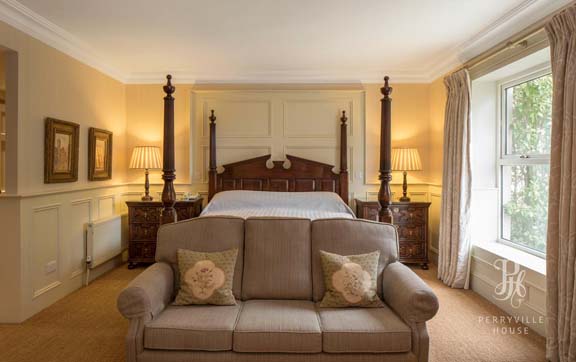 After breakfast everyone will drive to Kinsale, County Cork (2 hrs) for a two-night stay at 4-star Perryville House. This 200 year-old town house provides a touch of luxury combined with a homely charm. Overlooking Kinsale Harbour, Perryville House evokes a sense of days gone by, elegance and relaxed intimacy you cannot help but fall in love with.

After check-in the tour will take the 15 minute drive to encounter one of golf’s greatest and most spectacular courses, Old Head Golf Links. Occupying a stunning and unique headland reaching out over two miles into the Atlantic Ocean, the Old Head of Kinsale is home to a world-class course where you will find little margin for error, especially on the holes bordering the cliff tops! While there are many memorable holes at Old Head, the 17th is a standout. The long par 5 requires a bold second shot to the right of the fairway, otherwise you are left with a blind approach to a green nestled in a punchbowl on the edge of the cliffs. Perched on the side of the cliff running along the island’s narrow entrance, the do-or-die 12th is described as one of the most outrageous holes in golf! The 19th is a spectacular closing hole and should be played from the high back tee at least once to truly appreciate the dramatic effect.

With cliff-tops three hundred feet above the Atlantic waves, booming and echoing as they smash into the cave tunnels below, it’s unlikely you will play a more dramatic golf course anywhere in the world. And that’s why you will play it again tomorrow on your final day!
European Course Ranking: Top 30 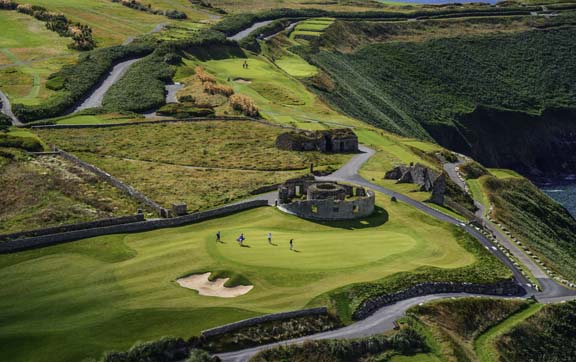 Relax this morning with your full Irish breakfast and prepare yourself to take on the Old Head course once more. While you may now know the layout, be aware that the course is set up on a daily basis depending on the prevailing weather conditions, which you will have already discovered, are a major factor when playing Old Head.

Tonight is the last night together and what better way to end than to have a final get together at your Farewell Dinner. Here you can dine and reminisce with your group – those who saw how you played, understood the challenges, and had the experience of a lifetime with you.

Sadly, your final day has arrived.  After breakfast everyone will take the luxury coach to Cork Airport (30 mins) to meet your departure flights OR the option of 3 nights and the Saturday and Sunday at THE OPEN

2020 flight information is not yet available.

Pre Register your interest, we will contact you as soon as fares are available.

Matthew Laverty Corporate Golf and Bullant Sports now combined to bring you an exciting new venture – Iconic Golf Travel.
As the name suggests, these are no ordinary tours, but the very best available, hosted by Matt and Smokey and run with the assistance of Rod Eather, who’s more than 30 years of travel experience has seen him in positions such as Chairman of the Council of Australian Tour Operators (CATO) and Managing Director of both Beachcomber Tours and Seekers Worldwide. Most long haul tours will be strictly limited to 24 participants including Smokey and Matt. Future itineraries will cater for varying numbers and will also be available for individual travel, for those who cannot join the group tours for various reasons. Iconic Golf Travel is in the process of designing some very exciting trips which include golf’s majors, as well as combining golf with other word class sporting events and cultural experiences. Our first outing with be the Irish Golf tour in 2019 with optional extensions to attend The Open at Royal Portrush.