(Unfortunately information on this page may have expired. Please contact our specialists on travel@FirstClass.com.au or call 1300 30 80 81 for updates) 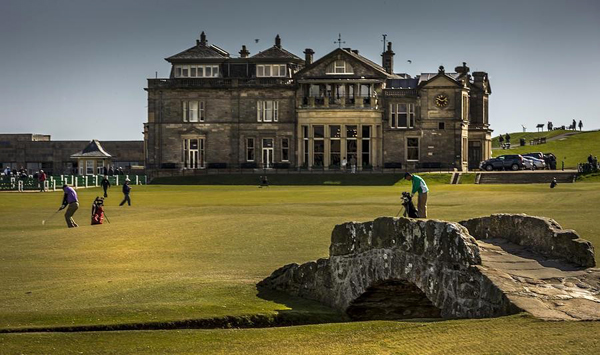 Especially created for groups of friends and couples travelling together, this is an eight-day luxurious and journey that seamlessly blends golf and sight-seeing.  The golfers will tee off on Championship courses, including the legendary Old Course, whilst their partners will participate in a tailor-made touring programme, visiting some of Scotland’s iconic attractions.

Day One: Arrive Edinburgh International Airport and to Gleneagles

Arrive into Edinburgh International Airport and you’ll be welcomed by our expert local chauffeur and guide who will accompany you for the duration of the trip.

Relax in this world-class property and perhaps participate in one of the resort pursuits.

To ensure the very best and most enjoyable golf experience, the golfers will commence with a

session at the PGA National Academy for Scotland.  Here, they will cover the unique skills that are necessary to perfect the putt, drive or chip. Thereafter, play the PGA Centenary Course, created by Jack Nicklaus – it is said to combine the best of both the Queens and the Kings. This parkland course was the Host Venue for the 2014 Ryder Cup, where the cream of European and American golf battled it out on Scottish soil for the first time in more than 40 years.

The private partner programme will be a visit to Scone Palace, seat of the Earl and Countess of Mansfield whose family have lived there for over 400 years. Fifteen hundred years ago it was the capital of the Pictish Kingdom and centre of the ancient Celtic church and in the intervening centuries it has been the home of Parliaments, the crowning place of kings and immortalised in Shakespeare’s Macbeth.

Highlights include the State Dining Room and State Drawing Room, with walls clad in 19th century Chinese silks and the magnificent Long Gallery, dating back to 1580.

See the 18th  century painting of Dido Elizabeth Belle and her cousin Lady Elizabeth Murray, attributed to German neoclassical artist Johann Zoffany. They were the subjects of the recent film, Belle, which shows Dido’s life as the mixed-race natural daughter of a Royal Navy captain who was raised by her Uncle William, the 1st Earl of Mansfield.

Refreshments will be served privately in the former private apartments of the Earl of Mansfield prior to returning to Gleneagles.

The golfers will enjoy their first Scottish links course as they play Carnoustie Golf Links, reputed

to be one of the toughest courses in Scotland. It has provided The Open Championship with many of its most notable winners. At its first Open, in 1931, the winner was Tommy Armour, a First World War veteran who was blind in one eye; in 1937, Henry Cotton won the second of his three Opens in horrendous weather conditions.

For the partners, enjoy a private guided tour of magical Glamis Castle. It has been the ancestral home of the Strathmore family for over 600 years but it is perhaps best known as the childhood home of Queen Elizabeth, The Queen Mother. Highlights include the Royal Apartments which are unique to Glamis as they include the suite of rooms arranged by the 13th  Countess of Strathmore following the marriage of her daughter, Lady Elizabeth Bowes Lyon to Albert Duke of York in 1923. In 1936 the couple ascended the throne as HRH King George VI and HRH Queen Elizabeth and as such she was the last Empress of India.

Thereafter, continue to St Andrews, the undisputed home of golf and check-in to your award- winning accommodation for three evenings that takes its name from the famed fairways that are its neighbour.

For the golfers, play what is often regarded as the oldest “new” course in the world, set out in

1895 by Old Tom Morris, or the Jubilee Course, which was named in honour of Queen Victoria for her Diamond Jubilee. It is widely regarded to be the most challenging and toughest of the courses in St Andrews.

With the company of a local guide, the partners will wander the ancient streets and lanes of the beautiful town. See St Andrews Castle, which for centuries was the residence of Scotland’s most powerful churchmen. It was in the thick of the struggle for hearts and minds during the Protestant Reformation.

More recently, St Andrews has become firmly rooted in history as the place where it all began for the Duke and Duchess of Cambridge, whilst studying at the world renowned university.  Learn of the places they visited and enjoyed with their student contemporaries.

Shopping here is delightful. St Andrews is still refreshingly free of national outlets and chain stores save a few exceptions. Instead, there is an excellent range of independent, family-run shops and businesses, where you are guaranteed to find a unique range of goods matched by personal service.

The fourth and final tee in St Andrews is the Old Course. To play the hallowed grounds of what

is affectionately called the “Old Lady” is often viewed as the pinnacle in any golfer’s history. The  course  remains  essentially  unchanged from  the  days  of  Old  Tom  Morris.  The  double fairways, double greens and natural bunkering combine to produce a set of strategic demands on the golfer which are unmatched and completely unique.

“I fell in love with it the first day I played it. There’s just no other golf course that is even remotely close” – Jack Nicklaus

The partners will travel out of St Andrews on a charming route around the eastern peninsula of Fife, taking in incredibly picturesque fishing villages that nestle amongst the natural harbours of the coastline. These villages are testimony to the heritage of sea-fishing that once thrived in the area.

Depart St Andrews and travel south to Edinburgh. Sometimes referred to as the “Athens of the

North” it is one of the most beautiful cities in Europe.  It has two distinct areas: the Old Town, dominated by a medieval fortress, and the neo-classical New Town dating from the 18th century. The harmonious balance of these two contrasting historic areas, each with many important buildings, is what gives the city its unique character and why it was awarded World Heritage Site status by UNESCO.

Stay the final two nights at The Caledonian, a Waldorf Astoria Hotel. It  is converted from a Victorian railway hotel and nestles under the shadow of Edinburgh Castle. Affectionately known as “The Caley” by locals, it has embodied the very best in Scottish hospitality for over a hundred years.

Commence the day at Edinburgh Castle, which would be opened exclusively for a private tour

and breakfast reception. From its volcanic rock, it dominates and towers over the city every inch a mighty fortress and defender of the nation. Step inside the ancient walls and learn of the royalty who lived and died here and the struggles for control of the nation.

Take time to explore the Royal Mile. It lies at the heart of the Old Town and is arguably one of the most famous streets in the world. Delving into the Old Town is like leafing through the pages of a dusty historical novel as each era unfolds with its own legends and characters.

Early evening, and as the finale, visit the former Royal Yacht Britannia which would be opened exclusively and brought to life by a personal guide. Furnished to HM, The Queen’s personal taste, each room is filled with photographs of her children, treasured family heirlooms, much-loved personal possessions and gifts from across the globe. Prior to departing Champagne and a selection of canapés will be served.

Edinburgh Airport for your onward flight.

Tour costing is £8,450 (GBP) per couple based on double occupancy. Please enquire with our specialists for up to date availability at your desired time of travel.

A Breath of Fresh Air, or Not: Air Pollution in Holiday Destinations
With bushfire smoke choking New South Wales, we take a look at popular [...]
Etihad Rebrands Heathrow T4 Lounge as The House
Etihad Airways has merged with UK-based company, No1 Lounges, to rebrand [...]
BA1: It’s just business
British Airways' BA1 is an all-business class flight that services London [...]
Best Mobile Phone Plans for Overseas Travel
It pays to have a competitive global roaming plan when travelling [...]
Marriott International Enters Homesharing Market
Marriott International has joined the growing homesharing arena with the [...]