Sweden offers a modern take on history, combining its medieval heritage and maritime treasures with an urban-cool ambiance and staggering scenic beauty. Denmark is a rainbow of islands, gardens, schooners and crowning gems where mermaids and storytellers inspire new stories. Fjords head up a parade of natural wonders in coastal Norway, ferrying you aboard boats, troll car and private coach to glaciers, waterfalls, farms, country hotels and homes of artists who find music for their soul here.

Discover the inspiration behind fairy tales in the enchanting Scandinavian countries of Denmark, Norway and Sweden… Viking museums, royal palaces, rustic inns and stave churches that chronicle their seafaring legacy and natural charms. Travel by coach, ferry, and air through Denmark, Sweden, and Norway. Enjoy included flights from Stockholm to Copenhagen, Copenhagen to Bergen, and Alesund to Oslo… cruise through Norway’s dramatic fjords… see glaciers up close… visit a traditional wooden stave church… tour castles and palaces. Have fun at Tivoli Gardens. Discover the capitals of Copenhagen, Stockholm, and Oslo; see the Danish Crown Jewels, royal Viking ships, well-preserved medieval ports, and the warship Vasa, rescued after more than 300 years on the bottom of Stockholm harbor. 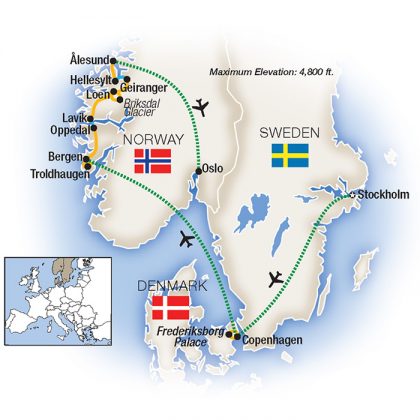 Begin today’s discovery of Sweden’s capital with sightseeing including a guided visit to Stockholm’s iconic City Hall, where the annual Nobel Prize award festivities take place. You’ll see the Council Chamber; the Gold Room, whose walls are sparkling with 18 million pieces of gold mosaic and glass depicting events in Swedish and world history; and the famous Blue Room, misnamed because the architect changed his mind and left its beautiful red-brick walls intact. Stockholm sightseeing continues with a panoramic lakeside drive over bridges that crisscross between Stockholm’s small islands, offering views of Gamla Stan (Old Town) and a skyline of 17th- and 18th-century buildings, the Baltic Sea, Lake Malaren, the elegant Strandvagen waterfront, the inner harbor, the Royal Palace, the Cathedral and Parliament. The rest of the day is free to explore as you wish – perhaps take a canal tour, or walk through the cobbled streets of medieval Gamla Stan.
Meals Included: Breakfast
Accommodation: Sheraton Stockholm Hotel

Fly from Stockholm to Copenhagen

Take a morning flight from Stockholm’s Arlanda Airport to Copenhagen, Denmark. After lunch at a local Copenhagen restaurant, embark on a city tour that includes a visit to Rosenborg Palace, built in Dutch Renaissance style, where you’ll see the Danish Crown Jewels. Tall towers and red brick masonry define this “petite” 16th-century castle, in use by Danish regents as a royal “summer house” until about 1710. If you wish this evening, we’ve included admission to celebrated Tivoli Gardens, which you can visit at your leisure this evening with tickets provided by your Tauck Director. This city-center, 160+-year-old amusement park is set within a 20-acre garden; from thousands of blooms to a lakeside beer garden, fireworks, a roller coaster and evening music, it’s a Danish experience unto its own.
Meals Included: Breakfast & Lunch
Accommodation: Radisson Collection Royal Hotel, Copenhagen

Head out from the city this morning to North Zealand, a region of woodlands, villages, lakes, royal parks and castles. You’ll enjoy Tauck’s early-entry, private visit to 17th-century Frederiksborg Palace, built atop three islands in a small lake, and considered one of the finest examples of Dutch Renaissance architecture. After a Danish family-style lunch in a local restaurant in North Zealand, return to “wonderful, wonderful Copenhagen.” The afternoon and evening are free to explore as you wish, perhaps discovering the historic Nyhavn area and strolling along the Stroget, Copenhagen’s main street; dinner is at a local restaurant tonight.
Meals Included: Breakfast, Lunch & Dinner
Accommodation: Radisson Collection Royal Hotel, Copenhagen

Board a flight this morning from Copenhagen to Bergen on Norway’s west coast. Upon arrival, have lunch at a local restaurant, then head to Troldhau­gen, the beloved Norwegian composer Edvard Grieg’s former lakeside villa, today a living museum and concert center; Norway’s foremost composer is perhaps best known for his musical score for the play Peer Gynt. Return to Bergen and check into your hotel on Bergen’s historic Bryggen waterfront, and enjoy the evening as you wish.
Meals Included: Breakfast & Lunch
Accommodation: Clarion Collection Hotel Havnekontoret

Today, join your local guide for a morning tour of Bergen, known for its centuries-old maritime legacy as well as a reputation as an important hub for the arts. Your tour includes a visit to Fantoft Stave Church, a 1990s reconstruction of an original 12th-century stave church that was destroyed by fire in 1992. Many centuries ago, the construction of traditional, iconic Norwegian wooden stave churches began with the slotting of posts (staves) into the ground to support thousands of skillfully crafted timber parts, which included carved portals and dragons’ head carvings on the roof. Following an afternoon at leisure, ride a ferry to dinner at a local restaurant, before returning to your hotel close to Bryggen, the city’s old wharf district. Featuring traditional wooden buildings and a medieval atmosphere, Bryggen was founded in 1070 during the days of the Hanseatic League; one of the oldest large trading ports in Northern Europe, it is now a UNESCO World Heritage Site.
Meals Included: Breakfast & Dinner
Accommodation: Clarion Collection Hotel Havnekontoret

Via Oppedal & Lavik to Loen

Journey northward today along the Norwegian coast, through photo-worthy landscapes that vary from wide-open fjords to green hills, icy glaciers and massive mountain ranges, as you set out from Bergen, ferry across part of the Songefjord from Oppedal to Lavik, and wind your way through the countryside to Loen, from which you’ll explore Norway’s inspiring fjordlands during a two-night stay at the venerable Hotel Alexandra, operated since 1884 by five generations of the Loen family. Enjoy a barbecue dinner tonight at the hotel.
Meals Included: Breakfast, Lunch & Dinner
Accommodation: Hotel Alexandra

All about glaciers at Briksdal

Travel today to one of Norway’s most inspirational natural wonders – Briksdal Glacier, set between roaring waterfalls and mountain peaks at the end of one of the Nordfjord’s three branches. Meltwater from the glacier has created three emerald-green lakes in the valley; a ride on a “Troll Car” past thundering waterfalls and a short hike to the foot of the glacier lead to views of absolutely stunning scenery. Enjoy a three-course lunch in Briksdal, then return to your resort to take advantage of its many amenities (some at additional cost) or explore Loen as you please.
Meals Included: Breakfast, Lunch & Dinner
Accommodation: Hotel Alexandria

From the Geirangerfjord to Ålesund

Your tour continues with a morning of unforgettable views (including some of the incomparable Geirangerfjord, one of the longest, deepest, and most scenic fjords in the world) as you drive from Loen to Oye, a serene alpine village on the Hjorundford, where you’ll have lunch at the Hotel Union Oye, in operation since 1891 and a favorite retreat among the elite for decades. Continue on to Ålesund for a two-night stay; have dinner at your hotel tonight.
Meals Included: Breakfast, Lunch & Dinner
Accommodation: Hotel Brosundet

The most important fishing harbor in Norway today, picturesque Ålesund is situated on seven islands on the Atlantic coast, linked by an intricate network of tunnels, carved out of granite. Join your local guide for a tour of the city, whose wealth of historic Art Nouveau (Jugenstil) structures were largely constructed between 1904 and 1907, after a fire had destroyed many of the community’s buildings – making Ålesund one of Norway’s leading repositories of Jugenstil architecture today. After a private lunch at a local restaurant, return to your hotel and spend the rest of the day and evening as you please in Ålesund.
Meals Included: Breakfast & Lunch
Accommodation: Hotel Brosundet

Fly this morning from Ålesund to Norway’s capital city of Oslo for a two-night stay. After lunch, visit Oslo’s Holmenkollen Ski Museum & Tower – featuring a ski jump complex whose history goes back more than a century, and the world’s oldest museum (founded in 1923) dedicated to the sport of skiing, built into the mountain below the ski jump itself. Check into your hotel and the enjoy the remainder of the day and evening as you please in Oslo.
Meals Included: Breakfast & Lunch
Accommodation:
Grand Hotel Oslo

A city orientation tour of Oslo offers views of the city’s striking modern opera house and downtown City Hall. With a local guide, take in the Vigeland Sculpture Park, with its 212 life-sized granite and bronze sculptures by famed Norwegian sculptor Gustav Vigeland (1869–1943), who devoted his career to the project; spotlighting many works that carry a humanistic message, the park is a popular Oslo destination. Next up, view skillful Norwegian works of a mariner’s kind during a guided visit to the nearby Viking Ship Museum, featuring three well-preserved Viking ships dating to 800 AD, found in royal burial mounds with fascinating artifacts – representing some of the best-preserved Viking ships in the world. Following a free afternoon in Oslo, please join us this evening for a farewell reception and dinner in the heart of the city.
Meals Included: Breakfast & Dinner
Accommodation: Grand Hotel Oslo 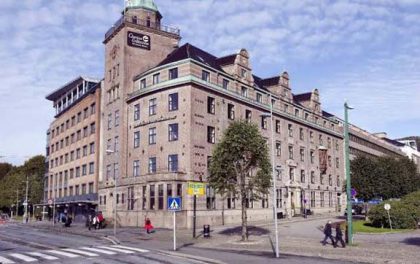 Clarion Collection Hotel Havnekontoret enjoys the perfect location on the quayside in central Bergen, adjacent to the UNESCO World Heritage Site of Bryggen. From here, Bergen attractions such as Fisketorget Fish Market, Fløibanan and Bergen’s famous aquarium are all close by, as are many of the city’s fine selection of shops and restaurants. Spacious guest rooms are furnished with two chairs, a desk, safety deposit box, minibar, iron & ironing board and tea & coffee making facilities, and a bathroom with shower. The hotel offers a compact gym is equipped with a treadmill, rowing machine and stepper, and a relaxation area featuring a sauna and steam room as well as an area for relaxation and socializing – and there’s always something refreshing to drink. 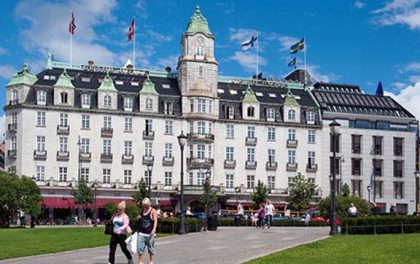 Norway’s best-known and most prestigious hotel, the Grand Hotel Oslo – situated at the corner of Karl Johans Street and Rosenkrantz Street in the heart of the Norwegian capital – first opened its doors in 1874, and for over 140 years has been host to the people of Norway, international guests, world leaders, celebrities and the Nobel Peace Prize laureates. Henrik Ibsen, the world-renowned Norwegian playwright, made the hotel one of his favorite daily haunts. The Grand’s guest experience is based on true Nordic luxury, delivered by a well-trained and enthusiastic international team… everyone deserves to be grand! The hotel’s spacious, luxuriously appointed guest rooms employ a blend of historic and modern design, and are equipped with a queen-size bed, armchair, LCD flat screen TV, coffee / tea maker, work desk, minibar, iron / ironing board and more. Freshly emerging from a major renovation in 2017, Grand Hotel Oslo will feature a new and inviting lobby sporting a glorious bar and restaurant that offers great Nordic tastings; renovated rooms guest rooms decorated in a modern classic style with a bohemian twist; and a new rooftop terrace that will be one of Oslo’s top destinations for fantastic views and classy drinks.