Per Person Twin Share
A Weeklong Tuscany and Umbria Journey

A Week in Tuscany & Umbria, 8 Days Florence to Rome with Tauck

Smaller groups, averaging 24 Tauck guests, enjoy an intimate travel experience on our weeklong Tuscany and Umbria journey. The sun-soaked hill towns of central Italy seduce the senses with a festival of daily life which Tauck guests experience firsthand: wine tastings in bountiful vineyards, a chef-hosted cooking class, ceramic making, hand weaving, medieval crafts… In Tuscany, spend two nights at a historic Medici estate-turned-luxury hotel in the Chianti countryside near Florence, with a cooking class at a farmhouse cooking school and a roof-top wine tasting lunch, a guided visit to a winery and a museum, and discovery of the ancient city of Arezzo, dating back to Etruscan times… Sightseeing delights during a two-night stay at a restored monastery in Umbria include a guided visit to medieval Gubbio, truffle hunting and ceramic insights… Two nights in Perugia at a palace hotel feature exploration of Assisi, an exclusive wine experience at a renowned vineyard, a hand-weaving workshop, a basilica visit, and special access to “Gaite” workshops in Bevagna… And in the magnificent city of Rome – an overnight is preceded by a visit to Spoleto and a guided tour of an ancient underground Roman church in Narni. 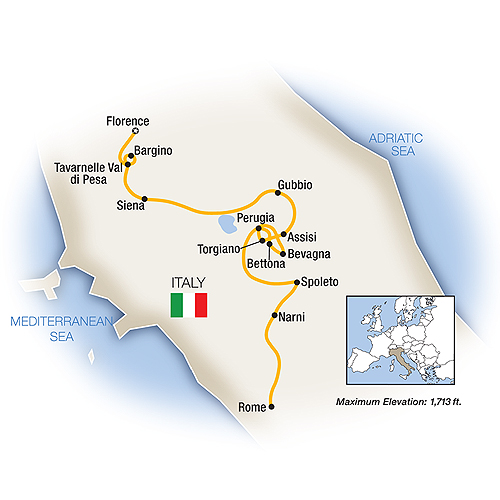 Tauck’s Umbria tour begins at 6:00 PM at Villa La Massa. A transfer is included from Florence’s Peretola Airport to Villa La Massa in Candeli on the outskirts of Florence, set at the gateway of the Chianti wine region in Tuscany. Meet your fellow travellers at a welcome reception and dinner tonight at your boutique luxury hotel – a former 16th-century Renaissance estate of the Medici family on the banks of the Arno River, surrounded by 22 acres of gardens, olive groves and lemon trees.
Meals Included: Dinner
Accommodation: Villa La Massa

Chianti, one of the oldest wines in the world, has been produced in Tuscany ever since the ancient Etruscans tended their vineyards here around 2,500 years ago. Imagine its long-lived history as you drive through the Chianti countryside this morning to a farmhouse cooking school in the ancient Tuscan village of Montefiridolfi. This morning’s hands-on cooking class with the former head chef of a Michelin-starred restaurant introduces you to the tastes and traditions of its regional food through anecdotal stories that add more flavor to this immersive culinary experience. Wine tasting is on the menu during a rooftop lunch in Bargino at the hillside winery of Marchesi Antinori Chianti Classico, whose historic wine-making heritage dates back to the 12th century. A guided visit to the museum and unique cellars reveals the family’s wine-making philosophy from the vineyard to the bottle, with a step-by-step look at the production process, including insights on fermentation, aging and environmental responsibility. After time spent at leisure back at your hotel, join us for dinner tonight at a typical Tuscan restaurant.
Meals Included: Breakfast, Lunch & Dinner
Accommodation: Villa La Massa

Arezzo in Tuscany & on to Gubbio in Umbria

Travel this morning to the ancient hilltop Tuscan city of Arezzo, whose long history predates the Roman Empire, going all the way back to the days of the Etruscans in the 4th and 5th centuries BC. Today a city of just under 100,000 people, Arezza possesses a wealth of historic architecture spanning the 11th to the 19th centuries – some of which you’ll see on a walking tour – including many piazzas, palaces, churches and basilicas, as well as a 16th-century Medici fortress (the Fortezza Medicea). After more time to explore and have lunch on your own in Arezzo, continue your journey to Lake Trasimeno and on into the province of Umbria. Arrive early evening at your hotel in Gubbio, set in a 17th-century stone monastery overlooking wooded hills, and enjoy dinner there at your leisure tonight.
Meals Included: Breakfast & Dinner
Accommodation: Park Hotel Al Cappucini

Explore medieval Gubbio on a walking tour this morning with a local guide. View the town’s well-preserved Roman amphitheatre still in use today, its 13th-century church of Sant’Agostino, adorned with spectacular frescoes, and the turreted tower of Palazzo dei Consoli, built between 1332-1349. Spend some time discovering more of Gubbio on your own, including its many craft boutiques known for their pottery and ceramics. The “black diamonds” of Umbria, truffles, known as tartufi in Italian, are mushrooms so rare and unique-tasting that they can cost hundreds, if not thousands, of dollars per pound. Enjoy a precious taste of these subterranean delicacies during lunch in a charming renovated castle on a truffle farm… then sniff them out on a private truffle-hunting experience in the Umbrian woods with an experienced guide and his trained dog who lead you to the prize! The evening is free to enjoy as you wish in Gubbio.
Meals Included: Breakfast & Lunch
Accommodation: Park Hotel Al Cuppucini

Assisi & on to Perugia, Umbria’s capital

A UNESCO World Heritage Site, Assisi reigns over Umbrian landscapes atop a hilltop perch that has welcomed travellers for centuries, especially pilgrims in search of heaven-sent miracles from St. Francis, who was born here. A guided walking tour of this medieval gem includes visits to the Basilica of San Francesco, eternal resting place for its patron saint, adorned with 13th-century frescoes by Giotto depicting the life of St. Francis and other works from the medieval and Renaissance periods. A Tauck-Exclusive al fresco lunch in the vineyards of Lungarotti Winery ensures an unforgettable taste of the bounty of land and vine in Torgiano. Continue on this afternoon to Umbria’s capital city, Perugia, once one of the key cities of the Etruscan civilization. Your hotel for the next two nights is located in the historic heart of Perugia, where your evening is free.
Meals Included: Breakfast & Lunch
Accommodation: Hotel Brufani Palace

Your day begins with a guided visit of Perugia; from your hotel walk down Corso Vanucci to the main fountain; tour the square and inside visit of the Collegio del Cambio, home to remarkable frescoes. Enjoy some free time to explore as you wish, or join us for a short drive to the nearby workshop of Giuditta Brozzetti, housed in the former Church of San Francesco. Inspired by the women’s tradition of producing the necessary materials for the household, Brozzetti sought out Umbrian traditional designs and in 1921 founded this workshop / school. One of the few remaining ateliers of hand-weaving on antique “Jacquard” frames in Italy, it is known for its unique characteristics typical of medieval Perugia. Early afternoon, travel to Bevagna, a treasure trove of Roman-era ruins and medieval charm – and home to four ancient workshops specializing in medieval crafts made out of paper, wax, silk and coins. A guided tour includes visits to the churches of St Michele and St Silvestro, Romanesque churches that face one another from different sides of the medieval main square; Piazza Silvestri, located in the main square; a private visit to select craft workshops; and a visit to the sea-themed mosaic floor of a 2nd-century Roman bath complex. Back in Perugia this evening, join us for dinner at a local restaurant for an authentic taste of daily life.
Meals Included: Breakfast & Dinner
Accommodation: Hotel Burfani Palace

You may be familiar with the saying that “all roads lead to Rome.” Today they do just that with a few stops along the way. From Perugia drive to Spoleto for a guided tour of the city. Famous for the Ponte Delle Torri (Bridge of Towers) erected in the 14th century on the foundations of a Roman aqueduct, the bridge is 262 feet high and 755 feet across and built with an impressive set of 10 arches. See the bridge, visit the 12th-century Duomo of Spoleto and spend some free time in town before travelling to Narni for a fascinating afternoon of exploration. Visit Narni Sotterranea (Narni Underground), the ancient Roman ruins which lay hidden underground for centuries until six young speleologists on a caving expedition rediscovered them in a vegetable garden in 1979. Hear all about the infamous tales that led to this hidden archaeological find as you discover a 12th-century chapel covered in frescoes, secret tunnels leading under the monastery complex of San Domenico, a Papal inquisition torture chamber and a prison cell covered in cryptic graffiti. Then drive on to Rome, arriving late afternoon for an overnight stay; join us for a farewell reception and dinner tonight.
Meals Included: Breakfast & Dinner
Accommodation: Hotel Splendide Royal Roma


*Rates are person based on twin share. Single Supplements apply, for more information please speak to one of our Travel Specialists.

A Breath of Fresh Air, or Not: Air Pollution in Holiday Destinations
With bushfire smoke choking New South Wales, we take a look at popular [...]
Australian Luxury Travellers Favour Italy
Leading survey reveals that Australian luxury travellers prefer Italy as [...]
Secret Pearls of the Veneto Region: Venetian Villas
Venetian Villas offer a unique and varied way to experience the Veneto region.
Most Beautiful Small Towns in Italy
Far from the bustle of Rome and Venice, these beautiful small towns are the [...]
Best Wineries in the World
Discover the perfect glass of your favourite vino at a vineyard in one of [...]