At his first breathtaking view of Yosemite in 1869, young John Muir had a life-changing moment – a surge of euphoria as he wandered, overwhelmed in the great natural beauty of a landscape unlike anything he had seen before: “We are now in the mountains,” he wrote, “and they are in us… filling every pore and cell of us.” As a self-made naturalist, philosopher, geologist, author, inventor and conservationist, Muir spent his life studying in “The University of the Wilderness,” translating his intense passion for nature into books that inspired a movement to protect “Nature’s temples.”

Follow Muir’s path on Tauck’s compelling Yosemite tour that traces his trajectory from San Francisco to the Sierra Nevada, embracing Muir Woods, Sequoia National Park and his beloved Yosemite, experiencing the powerful beauty of glacier-carved mountains, soaring redwood and sequoia forests, and the story of why they remain for us exactly as he found them. 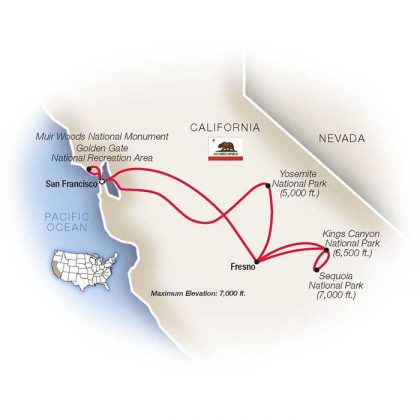 Muir Woods and The Presidio

Head across the city for a drive through the Presidio then over the Golden Gate Bridge to the green canopy of Muir Woods, a coastal redwood forest preserved as a national monument. These towering ancient trees, some 20 stories high, are among the last remnants of a fog-shrouded primeval forest that once blanketed the northern coast. A self-guided tour along its winding walkways takes you through a shaded, misty world of slanted cathedral light, dense flora, and tranquil running streams – a place to feel the awesome power (and silence) of some of the tallest living things on the planet. After lunch in picturesque Sausalito, hop aboard a ferry for the return trip to San Francisco. Dock at the historic Ferry Building terminal with its famous clocktower and its arcade of shops and cafés along the Embarcadero. The remainder of the day is free.
Meals Included: Breakfast & Lunch
Accommodation: The Westin St. Francis

Before there was a National Park Service, the job of policing and protecting the national parks belonged to the U.S. Army. At Sequoia and Yosemite, the parks’ guardians were the Buffalo Soldiers, who rode out every spring from the Presidio, crossing 300 miles on horseback to the Sierra Nevada. Drive a route that follows the Buffalo Soldiers’ path across the agricultural Central Valley. Stop in Fresno for lunch, then board a motor coach for the 7,000-foot climb to Sequoia National Park. Your destination is remote Wuksachi Lodge® on the park grounds. This afternoon, an expert from the Sequoia Field Institute describes how John Muir found and documented the “Giant Forest” in 1875, a perfect introduction to the park. Tonight at the lodge, a naturalist guides you through the spectacular constellations that fill the night skies.
Meals Included: Breakfast, Lunch & Dinner
Accommodation: Wuksachi Lodge®

Begin the day with privately guided walks among ancient Giant Sequoias soaring to the height of skyscrapers; your first walk is in the Giant Forest Grove to see the General Sherman Tree, estimated to be over 2,500 years old (and still growing). Next up is a walk along the “Big Trees Trail” at Round Meadow with an interpretive naturalist guide who will give you some amazing insights into the unusual ecosystem of the Giant Sequoias. Lunch today is a private barbecue style western lunch. Travels this afternoon inside Sequoia National Park are via small 10-passenger vehicles, accompanied by a guide; you’ll hear stories of early park “personalities” such as John Muir, Charles Young and Stephen Mather, as well as climb the 400 steps to the top of Moro Rock for stunning views of the park and the peaks of the Great Western Divide. The rest of the day is yours to explore as you wish. Possibilities include a visit to the Lodge Pole Visitor Center to learn about the amazing Buffalo Soldiers. Everyone returns to the Lodge late afternoon; the evening is free.
Meals Included: Breakfast, Lunch & Dinner
Accommodation: Wuksachi Lodge®

Depart Wuksachi Lodge and Sequoia National Park this morning and head over to Fresno via Kings Canyon National Park, arriving at the south entrance to Yosemite National Park late morning. Your Yosemite tour begins with a film by Ken Burns describing Muir’s passion for the Yosemite Valley, and his activism to preserve it for future generations, and is followed by lunch at Wawona® Hotel, an inn that was once a stagecoach stop. Then join a National Park Service guide and visit Glacier Point for a stirring view of the Valley, overlooking Half Dome and a panorama of glacier-formed peaks; on this spot in 1903, John Muir stood with Teddy Roosevelt during a private tour of the area that persuaded the President that Yosemite should be under federal protection as a national park. This evening, settle into your room at Majestic Yosemite Hotel (formerly The Ahwahnee®), a historic masterpiece of stone, timber and soaring stained glass windows in the heart of Yosemite; dine at your leisure.
Meals Included: Breakfast, Lunch & Dinner
Accommodation: Majestic Yoesmite Hotel (Formerly the Ahwahnee®)

Yosemite “is the grandest of all the special temples of Nature I was ever permitted to enter,” wrote Muir, who regarded such settings of awesome natural beauty as sacred places with restorative powers, “where the galling harness of civilization drops off and wounds heal, ere we are aware.” Discover the park’s power to move your spirit on a guided Yosemite tour in a special open-air vehicle, with opportunities to explore on foot. The afternoon is yours to enjoy the park at your own pace. Optional activities are available (some at additional cost), including bicycling, a hike over the footbridge at Vernal Falls, and a visit to the Yosemite Indian Cultural Museum and Village.
Meals Included: Breakfast
Accommodation: Majestic Yoesmite Hotel (Formerly the Ahwahnee®)

Back to San Francisco via the Central Valley

Your Yosemite tour days conclude this morning; depart Yosemite for the return trip to San Francisco, first visiting the Mariposa Museum, then driving across the populous Central Valley with a stop for lunch. Filmed narratives by Ken Burns and Dayton Duncan weave together the past seven days of history and nature, with insights you won’t get anywhere else. One of the stories you’ll hear relates to Hetch Hetchy Reservoir, a glacial valley that Muir fought unsuccessfully to save; in the 1920s, the federal government allowed its river to be dammed, turning the valley into a reservoir for the city of San Francisco. Today, a campaign continues, joined by the Sierra Club (which Muir founded) to remove the dam and restore the valley to its original state. “Mountain parks,” Muir argued, “are useful not only as fountains of timber and irrigating rivers, but as fountains of life…” an idea that remains controversial to this day. Arrive late afternoon at The Fairmont San Francisco, a Beaux Arts-style, premier hotel on Nob Hill – it’s listed on the National Registry of Historic Places. Join us tonight for a farewell cocktail reception and dinner; the setting may be a long way from the Sierra Nevada, but Yosemite can never be left behind (and may be as close as your glass of tap water…).
Meals Included: Breakfast, Lunch & Dinner
Accommodation: Fairmont San Francisco

Discover the World’s Best Wellness Retreats
Backed by ancient techniques and doctors on-site, we have compiled the best [...]
Australians Soon Able to Jump the Queue at US Border Control
Fast-track entry into the US might soon be on cards for Australian citizens
A Breath of Fresh Air, or Not: Air Pollution in Holiday Destinations
With bushfire smoke choking New South Wales, we take a look at popular [...]
Qantas to launch Brisbane to San Francisco flights February 9, 2020
The new Brisbane to San Francisco route will launch alongside the new [...]
Qantas: Non-stop flights to Chicago
Qantas has announced non-stop flights to Chicago from Brisbane which will [...]