The mythical Grand Prix of Monaco is sin city magnified and condensed into a tiny location over just a few days. It’s an event where you can tick several of your bucket list items off all at once. Fast cars, stars, parties, the rich, and royalty; all against the stunning backdrop on the coast of the Mediterranean along the French Riviera.

It’s the race of the Formula 1 Season, one of the most prestigious events that global sport has to offer. And one that attracts both motorsport fanatics whose religion is F1 racing, as well as fair-weather fans who have probably never watched a single race in their life.

If you’ve always dreamed of going, or if you’ve just casually had it in the back of your mind, here are five reasons to turn your musings into reality and get yourself to the 2017 Monaco Grand Prix (or make a date with your sofa for Sunday 28th of May).

No F1 track can lay claim to such a rich history as the one the Circuit de Monaco is laden with. Die-hard fans know it’s more than just the glitz and glamour, or the heavyweights of F1 driving that this event attracts, that makes this circuit the holy grail of GP racing. The stories that have unfolded on the narrow streets will forever stamp this event as the most coveted on the Grand Prix schedule.

The small Principality of Monaco first hosted the Grand Prix in 1929. The very first race was won by a mysterious Englishman named William Grover-Williams who, as it turned out, was no less than a secret agent who had worked for British intelligence during World War Two. There have also been harbour finishes and all sorts of blow out dramas on this contentious track, which simply adds to the magic of the whole affair.

2.One Track to Rule them All

Enzo Ferrari put it best; a win at Monaco is worth half a championship. Every Formula One driver wants to race in Monaco. This is largely due to the highly dangerous and outdated circuit which poses as a unique challenge for drivers. On roads that are barely wide enough for two F1 cars to drive abreast, drivers have limited opportunity to overtake, making it all the more exciting to watch when they become embroiled in the struggle to do so at the areas where they can.

There is also a tunnel – a rarity in motor racing. This tunnel presents its own set of trials. Its slight curve means they can’t see the exit when they enter which is also when they reach the highest speeds of up to 170mph. Rain adds further dynamic as it stays dry whilst the drivers are coming in from wet road, which means they are having to deal with different levels of traction.

To add to this cocktail of impossibility, the track is flanked by luxury boutique shops and hotels which are only cordoned off by barriers, leaving no margin for error as it could mean smashing into the shops, walls or into the harbour which is lined with luxury yachts. Taking all of this into consideration, what top F1 driver wouldn’t want to take on the challenge? 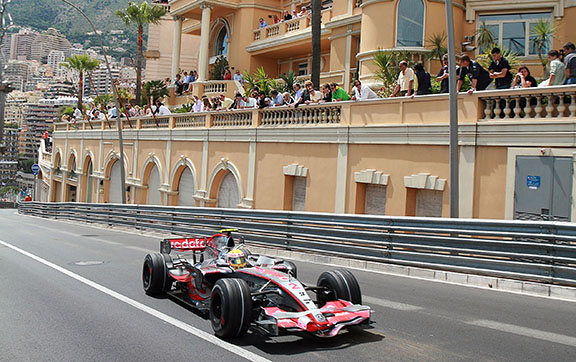 The track is not purpose-built like many other modern GP tracks. It’s actually just the local road winding through the city, converted into the race track specifically for this event. So, the best vantage points are not on the grandstands, but on balconies, terraces, and yachts. Guests at the famous Hotel de Paris have amazing views of the race, swimmers at the Stade Nautique Rainier III municipal swimming pool have almost a bird’s eye-view of the track, whilst the priceless collection luxury yachts that line Hercule Harbour places you ‘curb-side’ of the action.

The track is transformed from racecourse to public streets to outdoor nightclub and back again, every day of the event. At night, the entire circuit becomes one giant street party as the roads are closed off for the array of bars, nightclubs, and yacht parties to spill onto the streets. Bars and superyachts link together, tables are dragged into the centre of the track for dancers to lure patrons, and the whole strip heaves to club music and laserlights that stretches from land to sea.

Then, if you’re lucky enough to get yourself invited, there’s the Thursday night parties on board Force India team Owner, Vijay Mallya’s outrageously extravagant super yacht. His 95-metre ‘Indian Empress’ is the largest in the marina and hosts a magnificent revelry that legends are made of.

5.Rub Shoulders with the Rich and Famous

During this prestigious event, the entire Principality becomes an enormous VVIP locale where, given the right pass with the right package, you can find yourself rubbing shoulders and mixing freely with royalty in sport, entertainment, business, and politics arena. And with actual royalty themselves, as in the Royal Family of Monaco who attend the event every year.

Then there’s the Cannes Film Festival which happens to take place just before the Monaco Grand Prix. Cannes is also conveniently only 55km away which turns Monaco into a celebrity playground as they make their way to the French Riviera for race weekend, and the whole event becomes a who’s who of screen luminaries.

Comments About 5 Reasons the Monaco Grand Prix is so Special

You're commenting: 5 Reasons the Monaco Grand Prix is so Special