If you are open to new experiences, then go to the week of the world-renowned Cannes Film Festival. The ambience is palpable and you don’t need to be in the industry to take a sense of it home with you.

My companion and I were there for the 70th year of the prestigious event that brings together the cream of the film scene. The city was dotted with marquees including the port which, aboard a boat, we called our home during the festivities. From our vantage point, we were rewarded with a steady stream of ‘people with badges’ who could be heard discussing daily itineraries and what films would be screening as they walked past.

At dusk, a different type of buzz took over as the city prepared for the evening parties. These however, were mostly invitation only. We didn’t mind so much as people-watching was quite entertaining anyway, particularly all the activity that took place on the red carpet, which started at around 6pm every night. From a barricaded distance, you could play the ‘who’s who’ of the glittering world of movie-making. Huge screens could be found everywhere, making it easy to spot celebrities and who they were ‘wearing’ for the evening. Simply walking into the best hotels and clubs pretty much guaranteed you a celebrity sighting.

But the hat-trick highlights of our week in Cannes were:

The first is the Petit Train de Cannes which, as the name suggests, are small motorised toy-looking trains. They run an hour-long circuit around the municipality, are narrated and a must to get an excellent overview of the resort town. This includes the history of the buildings and the grand hotels (with commentary on insider celebrity gossip), as well as the cobbled streets of the old quarter of Le Suquet, where it stops for photo opportunities and you can snap up panoramic shots of this part of the French Riviera. There are two circuits available if you don’t have an hour; one takes you around Le Suquet (old Cannes) and the other the Croisette and the famous beaches of Cannes. Trains depart from the Palais des Festivals.

The second is Marche Forville, a lively indoor market and the most renowned of the covered markets in Cannes. Here, buyers on the one hand can sample the freshest, local produce and food (some homemade and even homegrown) such as on-the-spot battered zucchini flowers that you can snack on as you stroll up and down the aisles, whilst sellers on the other hand can show off the results of their work. Marche Forville is open Tuesday to Sunday, but on Mondays, the same space is transformed into a flea market where you can also find, as well as fresh produce from the Cote d’ Azur, paintings, books, antiques and vintage jewellery. 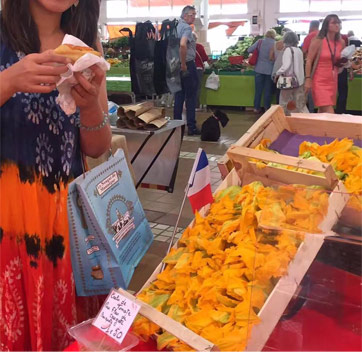 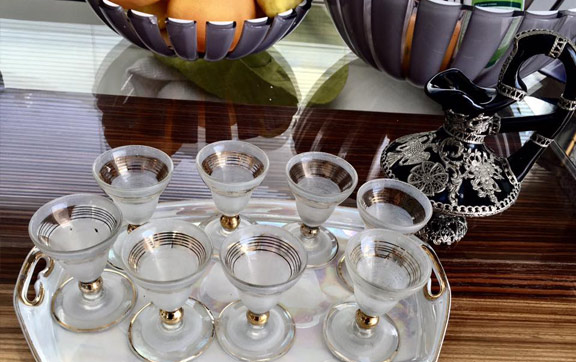 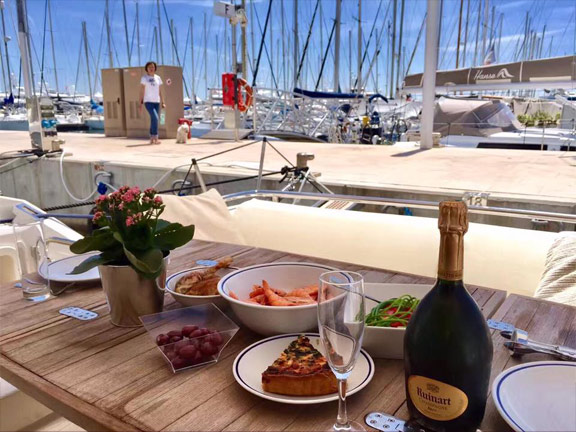 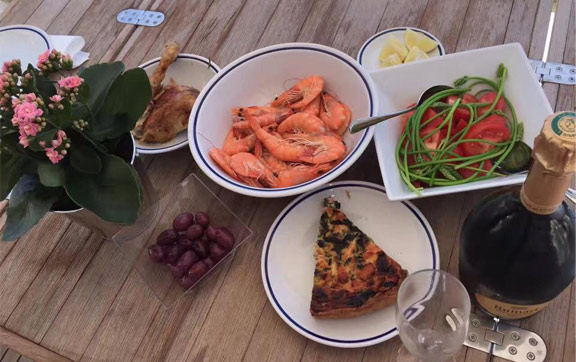 The third highlight of the week is the Rue d’ Antibes. Cannes is well-known for Hollywood A-listers, particularly during Festival week, and these super stars need somewhere to spend their cash and where better than the main shopping street of the city? You can find anything from cheap to the very expensive here actually, but the promenade is reserved only for the prestigious, upmarket stores. The scenery is charming and makes for a very pleasant walk.

We also had the opportunity to discover the Lerins Islands. These islands are an archipelago of four Mediterranean isles near Cannes of which the two largest are Saint-Marguerite island (the biggest) and Saint-Honorat island. The old State prison on Saint Marguerite island is famous for harbouring a well-known historic prisoner – the man in the iron mask. As we skimmed the azure blue ocean heading a mere 15 minutes away from Cannes, we were met with the lush, idyllic façade of these islands which provided a welcoming reprieve from the glitz and glamour of the film festivities. Unspoiled nature and hidden beaches await you on these real jewels of the Cote d’Azur; enjoy a Mediterranean lunch, sample some fine wines produced by the Cistercian monks who live there, explore ancient fortresses, and return to Cannes by cocktail hour.

For you movie buffs, you’ll be happy to know the main gong of the year, or the Palme D’Or, went to The Square, directed by Ruben Ostlund. Familiar names Diane Kruger (In the Fade) and Joaquin Phoenix (You Were Never Really Here) won best female and best male actor, respectively.

Comments About A Week in Cannes: Films, Festivals, and Toy Trains

You're commenting: A Week in Cannes: Films, Festivals, and Toy Trains

A Week in Cannes: Films, Festivals, and Toy Trains News