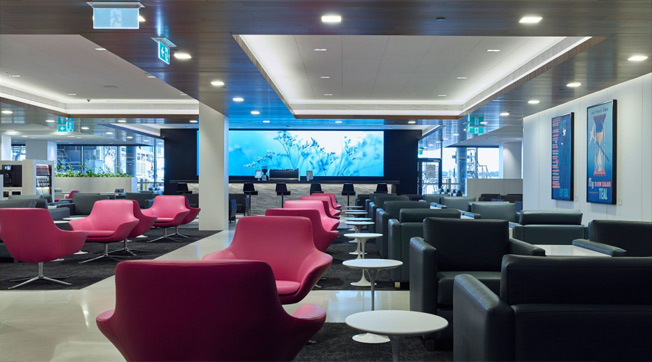 The improved facility at Tullamarine, located on level one of the International Airport Terminal, has a similar look to its already upgraded Sydney and Brisbane counterparts, which comes as no surprise since architectural outfit, Gensler, is responsible for the design of all three lounges.

It has 80% more capacity than it did pre-facelift, now seating 250 people. With larger and airier spaces, it allows for plenty of natural light to flow in through the tarmac-facing windows.

For nourishment, it offers a self-service buffet that varies throughout the day, two self-service drink stations, and a barista coffee zone which takes pride of place in the middle of the lounge. Here you can order your favourite choice of hot beverage the usual way, or via the Air New Zealand smartphone app and have it waiting for you by the time you arrive at the lounge.

There is also a selection of seating zones geared towards dining, working, or relaxing, from lounge chairs to long benches and quiet nooks. Most seating options provide direct access to AC and USB power outlets and even wireless charging capabilities (for compatible phones) if you happen to have left your charger at home.

The new Melbourne lounge is the third Air New Zealand lounge to have received a cosmetic upgrade, with Sydney and Brisbane having had the treatment in May 2015 and March 2016, respectively. In addition, the airline is planning to open a fourth lounge in Perth by the end of this year.

This investment in Australia is part of the Star Alliance member’s push to attract more travellers from the Australian market onto its long-haul services to the Americas, where it serves six destinations including Buenos Aires, Honolulu, Houston, Los Angeles, San Francisco, and Vancouver, via its hub in Auckland.

Passengers connecting through Heathrow Terminal 2, will now benefit from a faster and easier transfer experience. [...]

AirlineRatings.com has named the winners of the best airlines for 2017. [...]

Qantas, Singapore Airlines and Air New Zealand are all set to open new lounges in Brisbane Airport over the coming years. They will be joined by an airline-independent “Plaza Premium Lounge̶ [...]

Join us
Airfares from Air New Zealand
Star Alliance Round the World Business Class
Sale until 17Apr20
from $11,750