I recently joined few other travel agents on a trip organised by Intercontinental Bordeaux and and De Couvertes to Bordeaux area in Southwestern France, the experience was truly incredible and the famous wine region is a must visit for luxury travellers, wine and food-lovers alike.

Known as “la belle endormie”, or The Sleeping Beauty, the city of Bordeaux is an artwork constructed on a living tapestry. Just strolling around through the 18th century colonnades, you’ll find it easy to get yourself lost as if you were in a waking belle-epoque dream. No part of the city describes this feeling better than the Mirroir d’Eau, which is the most photographed site in Bordeaux and has been listed as a contemporary UNESCO site. Located next to the Garonne in the city’s heart, this spectacular piece of living art by landscape artist Michel Corajoud, alternates between being a perfect mirror of crystal water to a misting effect that shrouds the liquid plateau in a mesmerising haze.

Put this site to the top of your to do list as part of a city tour, if you love to take great holiday pictures like I do, this spot will be a dream come true. Another must visit in the city is the museum La Cité du Vin. As the name in French suggests, this marvellous museum celebrates the city of wine with an in depth lunge into the exciting and rich world of wine from vine cultivation through to bottling. The building itself is also quite spectacular and is shaped like a giant golden wine decanter! The city has plenty to do and see, you could easily spend a weekend, week or two here and still have even more to do. Also if you are a fan of shopping then the city is just right for you, Bordeaux has the longest shopping street in the world clocking in at one mile in length.

While I was in Bordeaux I stayed at the five star Intercontinental Bordeaux Le Grand Hotel. Just opposite the National Opera of Bordeaux this 18th century inspired hotel truly lived up to its reputation as the most majestic hotel in the whole city. While the accommodations at the Intercontinental are truly superb, the most attractive part of my stay was the food and the spa. The spa was absolutely incredible with great facilities that you can see in the video below.

The hotel boasts two superb restaurants that offer a journey of gastronomic delights that will amaze even the most refined culinary palette. You can start out at Le Pressoir d’Argent, where you can experience lobster prepared in the traditional silver press from which the restaurant takes its name. Or salivate over Gordon Ramsey’s take on French dining at Brasserie le Bordeaux, truly phenomenal as all of Chef Ramsey’s creations are.

A trip to Bordeaux wouldn’t be complete without a visit to some of the renowned vineyards that call the region home. From the Grand Crus Classes of Meroc, to Saint-Emillion, Grave, Sauternes and more; the region delights with its abundance of fine wines. In fact, Bordeaux produces the most high-quality recognised wines out of any other wine region around the world. The start of my second day, and regional wine tour, began with a stop at the UNESCO listed town of Saint-Emillion where we were treated to a glimpse into the past of medieval France. 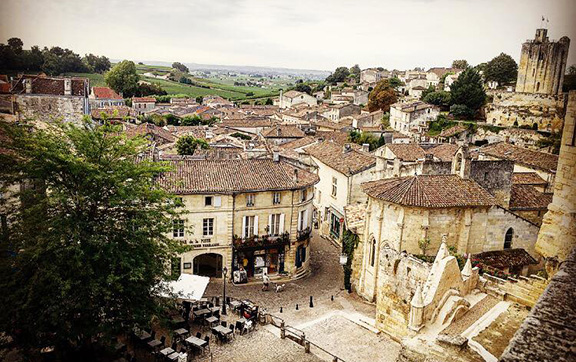 Running below the tiny town is nearly 200 km of underground galleries, and I got a chance to head down below the monolithic church at the summit of the village to walk in the footsteps of the ancient monks who called Saint-Emillion their home. Alongside the rich history of Saint-Emillion is the principal red wine areas of Bordeaux where we were able to taste some of the best red wine on the planet. From there it was a short trip to four other estates which included Chateau Villemaurine and Chateau Saint Christophe.

A Day in Arcachon

On our third day we strayed a little further away from Bordeaux and out to the Bay of Arcachon. This breathtaking lagoon covers a massive area and makes up one of the largest oyster production farms in all of Europe. The temperature here is perfect for growing oysters naturally and they are truly delicious! We were treated to a tasting by the sea in a traditional fisherman’s hut or “cabane”, and paired with locally sourced white wines, bread, butter and lemons our seafaring feast was one of the best of the whole trip.

While in Arcachon, you can not miss La Co(o)rniche, a spectacular poolside restaurant, which topped our experience in Arcachon. The restaurant is located inside Phillipe Starck’s Hotel and just near the edge of the impressive Dune of Pilat, the largest sand dune in Europe. The hotel is a favourite for holidaying locals and I would highly recommend a couple of days stay for the view and the food.

The Belly of Bordeaux

My final day was spent browsing “the belly of Bordeaux”, the largest market in all of Bordeaux. Strolling through the smell of fresh baked bread as we perused rows of organic cheeses, fruit, vegetables and olives. Everything you imagine would create your dream picnic is right here, under one roof.

Bordeaux has so much to offer, for any type of holiday makers, we had such a great time and look forward to going back!